From time to time I’ll be conducting interviews and/or Q & A’s with scientists from around the world in the blog’s new Meet the Scientist series. We’ll discuss current research, the state of science in general, and anything else of interest that might pop up. First up: Dr. Benjamin Kinney!

Dr. Benjamin C. Kinney has a Ph.D. in Neuroscience and is a neuroscientist at Washington University in St. Louis. He is also the Assistant Editor for the science fiction podcast Escape Pod. He writes science fiction and fantasy, and his short stories have been published in Strange Horizons, Flash Fiction Online, Cosmic Roots & Eldritch Shores, and more. You can find more of his writing at http://benjaminckinney.com or follow him on Twitter @BenCKinney, where he explains neuroscience concepts on his weekly #NeuroThursday feature.

Doug: Thanks for your time, Dr. Kinney! So, what got you into science?

Ben: I started like so many scientists did: with science fiction. This goes back into the mists of childhood memories for me. For as long as I can remember, I’ve always been driven by that sense of wonder and discovery. I ended up in neuroscience because it’s the biggest mystery of all: both impossibly vast, and impossibly personal.

Doug: What does your research focus on and what have you found?

Ben: I study how the brain and body change after injury to the hand and arm. In the past, I’ve worked with amputees and hand transplant patients (and cyborg monkeys), but now I work with people who’ve suffered nerve injuries. I’m particularly interested in handedness: how can it change and what can we do for patients whose dominant hands get injured. I’m just starting up a big study to compare laboratory measurements of hand function with how patients use their hands in their daily life. Hopefully we’ll be able to figure out which of those lab measurements have a real impact on patients’ quality of life. Once we do, we’ll be able to use therapy, training, and neuro-stimulation to improve the kinds of movement that matter most.

Doug: Are there any misconceptions in your field of work or in neuroscience at large?

Ben: Neuroscience is very complex, which means it can get oversimplified. I could talk all day about public misconceptions of neuroscience, but here’s one that ties directly into my own work: the idea that a person can be “left-brained” or “right brained” is complete bunk. The two sides of the brain are specialized for different skills, but you’re not “good at left-side things” or “good at right-side things.” You’re good at some things and not others – and it makes no difference whether those things are on the same side or opposite sides.

Doug: What’s one big question in the field that you’d like to see answered in your lifetime?

Ben: Every human being’s brain is different. Different folds and valleys, different networks of cells. What I want to know is: How much does that matter? There are so many problems, both scientific and medical, that we can’t address right now because of how much the brain varies from person to person. If we could predict or interpret that variation – for example, if we knew that certain neuroanatomical patterns affected an individual’s response to a psychiatric drug – we could understand and accomplish so much more.

Doug: How might we get more of the public to engage in science discussions?

Ben: I think the trick will be to get people thinking about science and scientists as part of everyday life, not just something that strange weirdos do in a mysterious basement laboratory. When I go to parties and people say, “I’ve never met a neuroscientist!”, I say, “Why not? Neuroscientists are everywhere. I’m surrounded by them every day!”

We’re living in different worlds – an inevitable part of how we as Americans so often structure our lives around work. But I think we need to pierce some holes in that to make science feel less like a mystery cult and more like something anyone can access.

Doug: You were recently brought on board as an editor at Escape Pod, congratulations! Any advice on how to approach incorporating hard science into science fiction or genre writing?

Ben: Remember that the science is there to support and inspire the story, not the other way around. If you want to write about a new piece of science or technology, I recommend focusing less on what it does, and more on what it means to people and their lives.

Doug: Do you incorporate your research interests into your writing?

Ben: Usually indirectly. I write across a broad spectrum of science fiction and fantasy, and a fair amount of it draws indirectly from my neuroscience training. I have strong opinions about human decision-making, artificial intelligence, and alien minds – whether scientific or fantastic! But every now and then I do produce a story that draws directly from my work. The most neuroscientific thing I’ve published is a silly little story called “Cyborg Shark Battle (Season 4, O’ahu Frenzy)” in the Cat’s Breakfast Anthology from Third Flatiron Press. In graduate school I used brain-machine interfaces to study how the monkey brain controls movement and Cyborg Shark Battle applies that technology for entertainment and profit in the realm of reality TV.

Doug: Running a lab can require a lot of funding and I imagine you spend a lot of time grant writing. I know that writing scientific grants and writing fiction can be different processes. As a writer of science fiction, how do you balance the two?

Ben: Sadly, the answer is “triage.” There are only so many hours in the day, so I try to use them for productive things. Thankfully “reading” is productive to a writing career, so I have ways to relax, but I’ve probably watched only 3-4 television shows in the last five years. I also sent my wife to Mars for a year, that gave me a ton of extra writing time! I recommend it for everyone.

Doug:  Can you recommend any good books about neuroscience?

Ben: Fiction or nonfiction? I’ll go with fiction, because unless you count peer-reviewed research publications, I don’t read non-fiction in my own field – I’m the wrong audience. My favorite neuroscience-focused science fiction books are Ancillary Justice by Ann Leckie, and Blindsight by Peter Watts. Ancillary Justice’s science is subtle, but the novel is permeated by a deep understanding of neurological disorders and cognitive science. Blindsight is more explicit about its neuroscience and it wraps a fascinating argument into an excellent (and terrifying) story, so I always recommend it even though I wildly disagree with it.

Doug: Thank you so much for taking the time to answers questions about your science and writing!

This site uses Akismet to reduce spam. Learn how your comment data is processed. 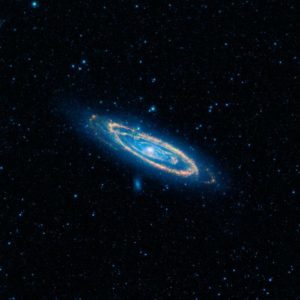