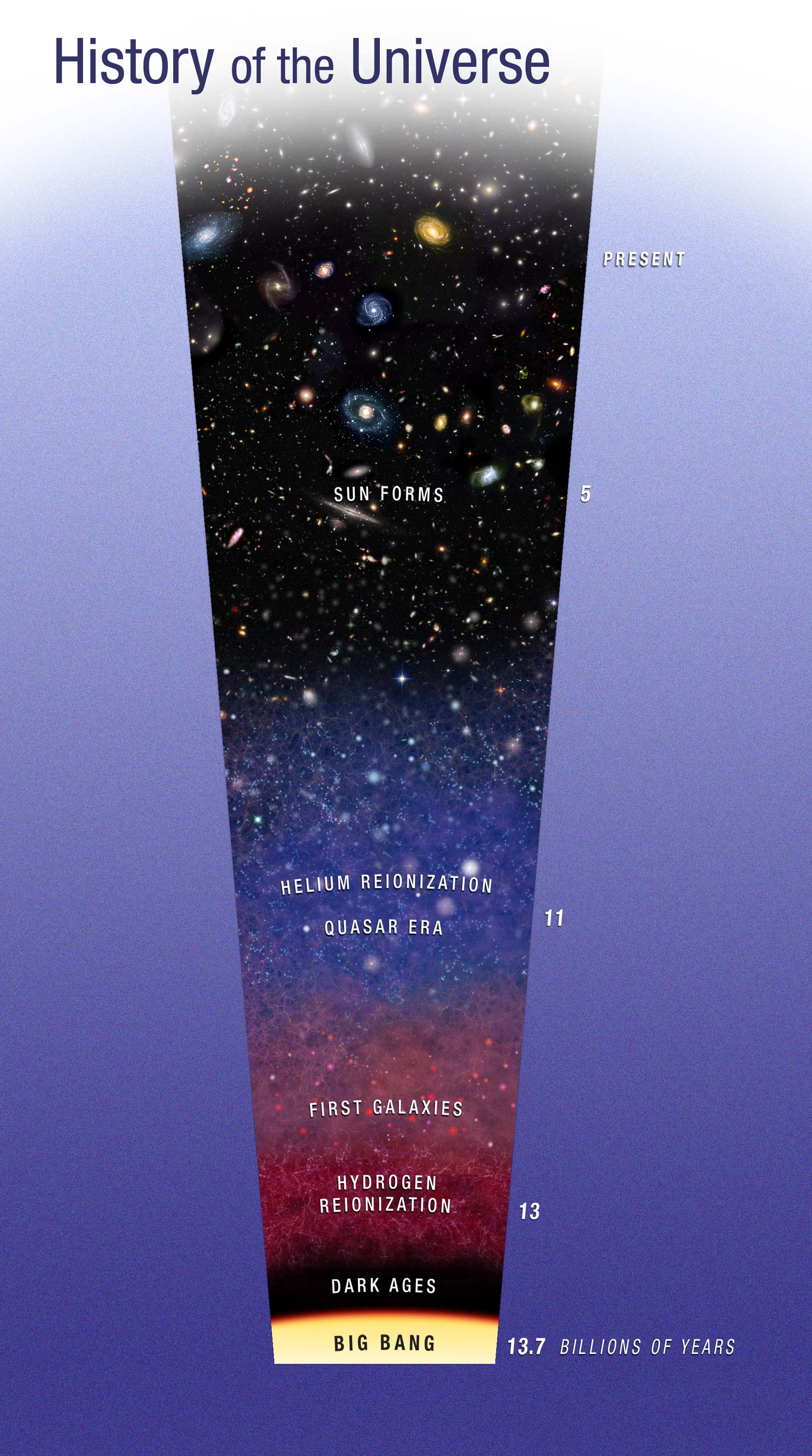 Three-fourths of all the atoms created at that moment were hydrogen, the simplest element of all, just a single proton orbited by a single electron. The rest of the atoms that formed were helium, which is the next lightest element, but four times heavier than hydrogen. For 200 million years (200,000,000) the universe was too hot and crowded for stars to form, but eventually things spread out and cooled off enough for gravity to start pulling the hydrogen and helium gas together into clouds. These clouds collapsed into stars that then eventually grew old and exploded, releasing more clouds of gas to form the next generations of stars.

These gigantic stellar explosions also created all the other elements that make up the planets and everything else we see, including humans. But even now, after all this time, hydrogen still makes up three-fourths of all the matter in the universe. You can actually harvest some of this primordial hydrogen and touch atoms that were created at the very moment of our universe’s birth. All you will need is a glass of water, a 9-volt battery, and some salt….

Water is made up of two elements — hydrogen and oxygen. These two elements like each other a lot and hold onto each other very strongly, but we can separate them with electricity. The two shiny parts on the top of the 9-volt battery are called terminals. They let electricity flow out of and back into the battery. (More on how batteries work another day.) One terminal is positive and is labeled with a plus (+) sign. It looks kind of like a small metal cup. The other terminal is negative and labeled with a minus (-) sign. It looks kind of like a squashed metal basket and is wider than the positive terminal.

Once you’ve stirred in a small spoonful of salt, you should see streams of bubbles coming up from the two terminals. Since water has twice as many hydrogen atoms as oxygen atoms, the negative terminal should have twice as many bubbles coming up from it. If you put your finger in the water you can touch the streams of bubbles. When you are touching the hydrogen bubbles, you are touching atoms that were made 14 billion years ago — at the beginning of the universe. When you touch the oxygen bubbles, you are touching atoms that were created in the fiery explosions of dying stars.

You can try mixing other things with different glasses of water, like lemon juice or pepper, to see which things turn water into a conductor and which don’t.

Until next time, happy exploring!