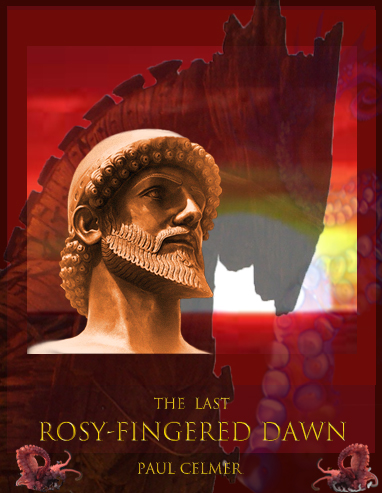 Bowman stared out, shielding his eyes against the dust swirling over the ramparts of New Ilium’s corroding blast wall. He’d never seen anything but devastation in all his years of trudging supplies to the top of the mega-city’s colossal wall. But now…

He turned to sub-commander Draxor, draped against the base of a rusty laser canon. “Sir, look!”

Draxor wiped a flabby tentacle across his filtration cilia and paused entering notes in his pointless log. “What is it this time?”

Bowman pointed into the pre-dawn darkness engulfing the vast barren plains outside the city walls. “A flash. Out towards Victory Ridge!”

Letting out the hissing burble Bowman well knew meant exasperation, Draxor peered out at the ridge, squinting his forward bank of perceptor slots against the dust. The wind howled through the sea of wine-dark murk. “I don’t see anything out there. And I don’t see my case of shna-gurt up here!”

“It’s next to your right pseudopod.” Bowman pulled his ragged coat tight around his thin body and stared out over the wall again. “Another flicker!”

“Maybe the spirits of the rebels we mercilessly crushed centuries ago are having a party.” Amused at his own remark, Draxor snorted out seedy droplets the wind flung back at him and added, “your ancestors. ‘Of all creatures that breathe and move upon the earth, nothing is bred that is weaker than man.’ — That’s from your own species’ stupid book!!”

Bowman quickly quelled the hot anger that flooded him.

But Draxor’s infrared receptors didn’t miss it. He wobbled with derision. “So next wave your ancestors sent robots. That went well. For us.”

Bowman felt a wave, like dense air, come in from over the plains. The hairs on the back of his neck rose. “Perhaps the robots survived,” he said softly.

“Oh, I’ll pass that on. And the mucky-mucks get all suited up and fly out there and find nothing but the same mountain of blown up corroding parts, and I get another black mark in my file and another bite out of my pension. Great idea. I’ll get right on that.” Draxor opened a canister of shna-gurt and went back to fiddling with his logs. His uncommon ability to fill his time with insignificant minutiae had earned him promotion to Praetorian Sub-Commander third class. And he hated jeopardizing that position following up on crazy ideas from his crazy slave.

“Maybe a piece of one of the heads, with a solar cell still attached.”

“After the largest plasma attack in the history of the Imperium? I’ve been there. Every school-aged hatchling gets shoved into some shielded rover to make that mind-numbing trip. Nothing but rock, rust, and ash. I shouldn’t have let you work attendant on those trips all these years.” He paused. A willingness to see back-stabbing and conspiracy behind every face was another of Draxor’s special qualities. He drained his drink and threw the canister at Bowman. He narrowed his preceptor slots and stared at his slave. “So what gives you that idea?”

Bowman dodged the canister and dutifully retrieved it, his stomach clenching at the edge to Draxor’s voice. “Well, even half a head, just in sleep mode, hidden under the ash. Centuries later the wind uncovers it, letting in light to a photocell, that sends a signal to say a severed arm that claws over and clamps the other half of the head to the first….”

“A broken robot stitching itself back together?” Draxor relaxed and his wheezy guttural snorting became a coughing fit.

“Maybe only an inch a day,” Bowman’s voice become harder, more alive. “A piece or two a year. So slowly no detector would notice. Just waiting. Keeping themselves hidden.

“What does time matter to a robot?”

Bowman heard the wind carry in a faint sound, like a metal scraping stone.

“The other officers say I give you too much free time.” Draxor wiped a trail of orange mucus dripping from the cilia of his horn with the sleeve of his shiny uniform. “They say Earth slaves are the worst.”

“Don’t you ever wonder whether you’re right?”

“To have slaves? How is that not right?”

“Ha. Ha ha haaaaaagh! Not just like us. You are inferior, as is proven by your enslavement.” Draxor waived a long tentacle towards the vast cityscape behind the wall. “But you should have no complaints. I have kept you from the mines. I allowed you schooling, so you could better entertain me. Although sometimes I wonder if that was a mistake.” Draxor turned and opened another log.

Bowman heard metal on stone again, a little less faint. “What about the scales of justice?”

“From that “stupid book” in the Earth libraries you sacked. The Goddess Themis. She held scales. To weigh souls, guilt or innocence. And a sword.”

“The second wave was lead by a robot based on a character from that ‘stupid book’. A great warrior. A master of trickery….”

Draxor spit into the rust-flaked dirt. “Did you steal some of that shna-gurt you hauled up here? A pseudo-mind programmed to mimic an imaginary alien who only existed in a book. Maybe that’s why they all got blasted to sub-atomic particles. Now be quiet. The Centennial Conjunction is in five rotations and I still haven’t calculated how many slaves we’ll need to feast on.”

“So I lied. It never stopped and it never will. Now leave me alone. This is tough. Everyone wants the same species and the same young age…” He made the sound like a bellows sucking in heavy liquid that meant an activated appetite.

Bowman turned and stared over the wall, shaking, burning with rage. The wind dropped and he heard the metal on stone sound again. Louder. Closer. He leaned over the ledge of the wall. Some kind of animal… a giant…. What were they called? Horses…? He rubbed his eyes, clearing the dust. It remained. A mountain of shadow nearly half as high as the wall. He started to tell Draxor and then stopped himself. He stood bolt upright, turning his back to the plain and standing stiffly.

But Draxor’s instinct for self-preservation was well-developed. “What? What is it?” He heaved himself to the wall and leaned over. He stared, leapt up on all eight legs and knocked the rusting safety off the laser cannon. He swiveled it around and down, shooting wildly, sending ice-blue firebolts booming along the foot of the wall. Long white-hot arcs of molten rock and metal sprayed in every direction. Boulder-sized fragments spun and crashed into the city walls, resounding like the hammer strokes of a titan. He didn’t stop until the cannon was empty.

Hunks of glowing metal and rock cooled. Alarms blasted across the citadel, the screams of citizens and slaves rose up to the ramparts. The rising suns cast faint gleams over a vast field of wreckage.

Draxor scanned the blast zone. “Nothing there now.”

But Bowman saw something. Curled in a ball, a golden figure rested in the middle of the devastation. He watched it uncurl, watched it stretch out. It had only two arms and only two legs. No tentacles. Like him. It started running. Towards the wall.

The gold figure scaled the hundred meter wall faster than any sand skater. It reached the guard post. Draxor raised his laser pistol but a sword flashed in the light of the twin suns and the pistol clattered to the ground. Draxor’s head spun off and landed in a growing puddle of orange fluid.

The bright rose-red rays of the rising suns enflamed the robot’s skin of crazy quilted metal plates as it stood atop the wall, sword gleaming like a torch. And it shone on a myriad of metallic beings advancing swiftly across the plain. The robot turned to Bowman.

“You, you’re him. From that book…” Bowman stammered.

“I am Odysseus, the one of twists and turns!! My fame has reached the skies! Much have I suffered, labored long and hard!” The gold figure’s voice thundered, and his eyes glowed with a spark transmitted across six-thousand years from the mind of a old blind poet of ancient Earth. “Fear not. I have been sent to battle on behalf of the Achaeans, of humanity. Who are you?”

“Slave no more! It is time to rejoin the battle, Bowman. The scales of justice must be balanced! The Imperium never thought I would come back. Now upon them the terms of destruction are fastened. I will not stay my hands from the slaughter until I have taken revenge for their transgressions, until the score is paid.”

Bowman quailed. He had known no other life than the brutal confines of the Imperium. But he nodded. Slowly he leaned down and picked up the pistol. And as the light of the twin suns spread rosy-fingered dawn across the wine-dark plain, Bowman led Odysseus down a thousand winding stairs to a door at the base of the wall., and let in the reconstructed robots of conquered Earth, to balance the scales of a justice conceived in an age ancient yet not forgotten.

You can comment on this story at The Forums and on our Twitter page. You can Subscribe to receive notifications of future publications, and to help us bring you more stories, artwork, podcasts, and articles.