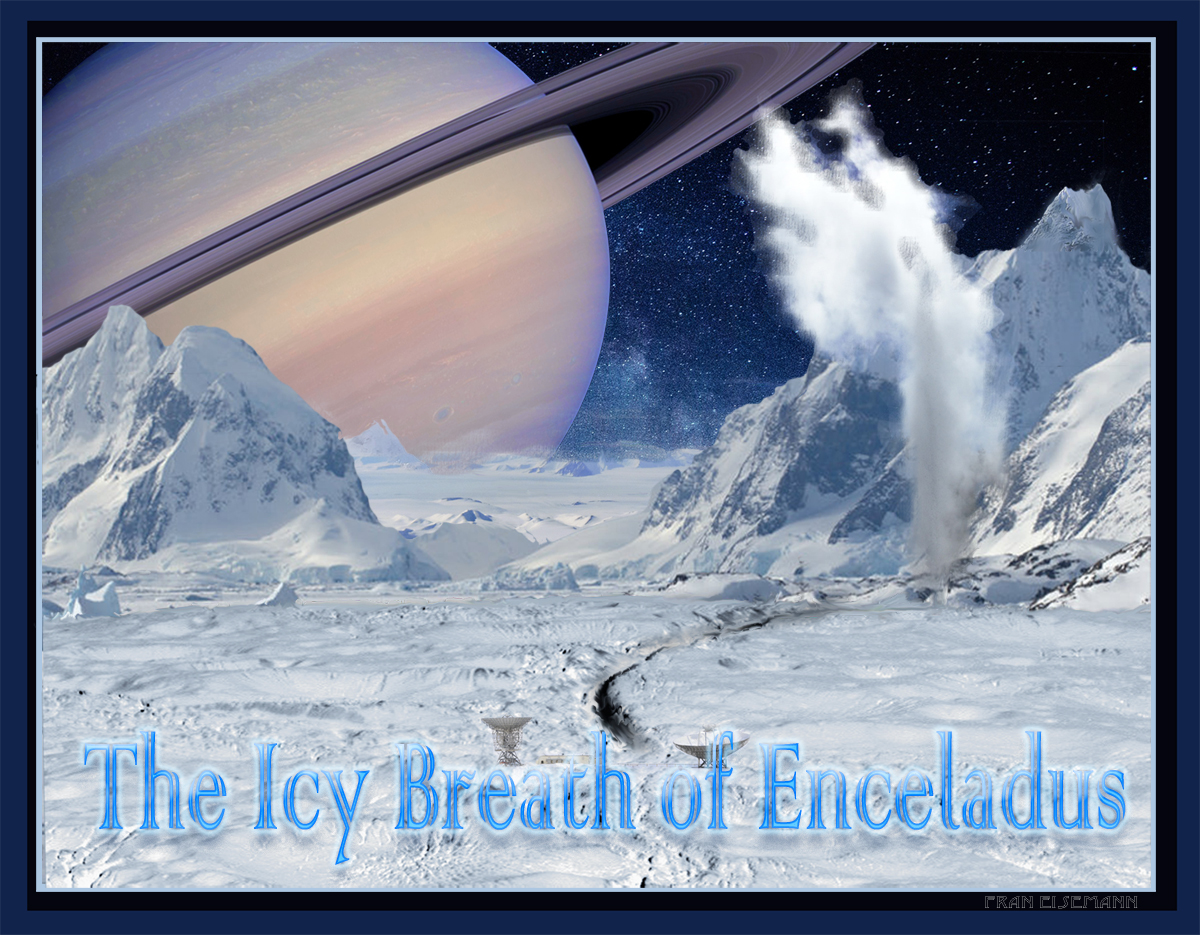 The Icy Breath Of Enceladus

The stars are hard diamonds against a jet black sky and yet still it snows. Not from clouds: in the near vacuum there are none. The snow is coming from a geyser two klicks away, the ice crystals sent high above the moon’s crusted surface. Some escape and are captured by the gas giant lurking on the horizon, forming Saturn’s disperse E-ring. The rest gradually settle under Enceladus’s feeble gravity, with no atmosphere to slow them down, no winds to change their pre-ordained destination.

I get a chill every time I see the crystals fall against the observation station’s thick dome of plexiglass. A foreshadowing of the end; my inevitable doom. The slowly accreting snow has already blocked most of the scientific instruments. The spectral analyser was first to go and others have followed in short order. But they had already done their jobs; already demolished the dream.

“Not enough iron,” grunted Adam Fletcher, our xenobiologist, poring over the results. “Not nearly enough. There’s more iron in this lander than there is in the whole damned underground ocean.”

He gave me a baleful glare. As second pilot with no science credentials, I was the ‘spare’ on this mission and with the commander and senior pilot–Kye Marek–such a control freak, I had plenty of time on my hands to ask idle questions.

“I do,” Fletcher said, “Chemistry does. Maybe if this was Titan, where methane takes water’s place… But here, with a water and hydrocarbon base, iron is essential for even the simplest of life-forms and Liebig’s law states that growth is limited by the availability of the scarcest resource. Heat, liquid water, amino acids: all plentiful and all totally irrelevant, for want of the barest trace of iron.”

The ice geyser is the reason we’re here, rather than anywhere else on Enceladus’s snowball surface; it’s what we came to study. Why look for life elsewhere, when we knew that here there was liquid water aplenty, such a rarity outside of Earth’s Goldilocks zone? And why go drilling through the moon’s thick icy shell, when lurking Saturn’s tidal forces warm and churn and spew those waters for our waiting instruments to sample?

The designers of our observing station factored in the regular falls of ice and snow. They built in a simple, effective way to clear the instruments: jets of compressed air. Voided into the vacuum with explosive force, the jets are more than adequate for the task of dislodging a scattering of mere ice crystals.

I daren’t use them, not anymore. When first we set up, twenty-seven Earth days ago, we delighted in blasting every snowflake, every crystal, as soon as it landed, taking turns to operate the mechanism. The falls are heavier now that the geyser is getting closer. Much closer. The one thing we never expected, that we didn’t plan for when we established our base at a supposed safe distance.

There had been plenty of discussion, both on-board and back on Earth, on what that safe distance should be; what was an acceptable risk, without being so far out that we would be unable to do any useful science. In the end, Mission Control settled on five kilometres from the nearest geyser, with a second, smaller, expendable monitoring station further in, serviced by a pair of snow tractors.

All gone now. The outpost, the twin tractors, my three colleagues and my ticket home. I have overstayed my welcome on this unforgiving, cruel moon and I need those precious puffs of air to breath.

For a while longer, anyway.

If the geyser continues its steady progress–and it has shown no signs of doing otherwise–I have a little over two weeks left. In a fortnight’s time the ground will open up and swallow me and our flimsy base down, spitting the remains into the empty sky. But I’ll be buried long before that inexorable end; our early measurements have made that quite clear. Two hundred kilos of ice crystals and water vapour ejected each and every second and the bulk of that falls near to the cryovolcano’s gaping maw, the maw that is getting ever closer.

On Earth, the fiery plumes above Mount Etna were known to the Greeks as the ‘Breath of Enceladus’. When this, the sixth largest moon of Saturn was named by its discoverer, the British astronomer William Herschel–named as all the others moons were after the offspring of the God Jove, children of the planet above–no-one knew we’d find volcanoes here, a quarter of a millennium later.

Just another elaborate joke the vast and uncaring Universe decided to play on us. Not fiery though, these volcanoes, not like those back on Earth. Instead of molten rock: molten water. Instead of ash and pumice: ice. Instead of radioactive decay the heat that triggers the near constant eruptions is generated by the tidal forces from mighty Saturn, forever looming on the unchanging horizon.

After our early disappointment–“Another Mars, damnit!” Fletcher spat–we set about making our measurements, doing our best to explain our odd snowball home. And it wasn’t long before the iron question came up again, from another direction: this time from Emma Tyler, our astronomist.

“What doesn’t?” I asked, trying to peer over her static-splayed hair at her tablet. Funny, when we blasted off from Earth, we’d both had short hair, as short as the men’s, but that was eighteen months ago. Hers must have been twice the length of mine now and me at half her age. I wondered what the science was behind that?

She pushed the screen between us, spinning it around with an outstretched finger tip, before gently snagging it in its slow descent. Held aloft, I peered at the arcane numbers on the screen as she hesitated before trying to explain. “The E-ring and the plume from the ice geysers is mostly saline–salty–water, with nitrogen, methane, CO2 and a few larger hydrocarbon molecules. But Saturn’s other rings contain a goodly scattering of rocky meteorites. Standard solar system fare; an assortment of stone aggregates and iron-nickel alloys. Some of those meteorites have got to end up impacted on Enceladus’s surface. So where’s all the iron gone?”

She shrugged. “Over time, perhaps. But what about more recent collisions? At one-one-hundredth-g gravity here is too weak and the ice crust too thick. We know that some areas of the surface are young; they’re billiard-ball smooth with hardly any craters at all. And we know the E-ring is unstable, needing to be constantly replenished by the geysers on Enceladus. Any meteorites that get kicked out of the inner rings should be vacuumed up by this moon before being folded into the ice and water layers. So there should be an abundance of iron dissolved in the sub-surface ocean. Like I said, it doesn’t make sense.”

I pondered this for a moment and then gave up. “Maybe Earth will suggest a solution?”

Maybe they would have done, if the communications satellite hadn’t fritzed out a week after we landed, leaving us deaf, dumb, and blind. The one thing we didn’t have a back-up for. We never knew if a chunk of orbiting ice had smashed into the satellite, or if some software glitch had just as effectively silenced it.

Marek called a meeting. Without the comms satellite, our findings couldn’t be sent back to Earth until we left Enceladus: the lander module’s transmitter wasn’t powerful enough, we needed the orbiting relay. Nor could we pick up any messages from Earth; we were on our own. Was that reason enough to abort the mission?

No, it wasn’t, we all agreed. Everything else was functioning fine and we weren’t likely to come this way again, especially if we found no signs of life. We had plenty of onboard storage for the data and samples we would return; Earth could wait a little longer for the results.

It should have been me who set out in the second tractor to relieve the monitoring outpost. I was the spare, after all. But Fletcher wanted to check a couple of seismometers that were misbehaving and didn’t trust me to do the job right.

Only they weren’t misbehaving; they were warning us.

Too late, too late.

I should have screamed along with them, for with the loss of both tractors the same fate awaits me. I was dead, I just hadn’t realised it yet. I could operate the return craft on my own, sure; that’s what all those hours in the simulator had been for. But I can’t get to it, though it’s barely a hundred meters away. Not without a tractor.

And so here I am, stranded on this alien world, awaiting my inescapable fate.

I’ve spent most of my time trying to align the little antenna we have with Earth, trying to boost its power, waiting for Enceladus’s thirty-three hour pirouette around Saturn before the next failed attempt. When I started, I think I just wanted to say goodbye, to tell them what had happened. But as I’ve sat here alone and afraid and listened to the thick ice beneath the station creak and groan, watched the steadily increasing patter of crystals on the dome above my head, my message has changed.

I’m not a scientist, so maybe there’s a more rational explanation than the one I’ve come up with for what has befallen our mission. Maybe a true scientist would refuse to even entertain the idea without some further proof. But for me it all fits.

The ice geyser, the monitoring outpost, and our base station, were not in a straight line. Deliberately so; we wanted to be able to triangulate our instruments on the fifty kilometre high plume of ice, to allow data from both stations to give us a sense of the whole. If the geyser were to start moving randomly, it would have been slim odds and terrible bad luck that one of our two stations was directly in its path. But for both stations to fall prey to it? What are the odds that the geyser would change course again after gobbling down the outpost? What are the odds that it changed its course to head directly towards me?

When we came here, looking for life, we thought we might find a hardy microbe or two. An extremophile. Something that we could study under the microscope, something that might tell us a little more about the origins of life on Earth, a clue to how prevalent life is in the Universe.

But what sort of an organism can move the vents of an ice volcano for its own purposes? What sort of creature can detect the fall of scarce and therefore precious iron on the frozen surface, iron that it has already entirely depleted from the churning slush of the oceans below?

As the glittering motes settle, entombing me with glacial slowness, I think back to those early pictures of Enceladus, the ones from the Cassini mission, from the Titan explorer. I think of the strange patterns on the bright, bright surface, the tiger stripes and other markings. Were those fracture lines and ridges random? Or are they sensitive detectors, some behemoth’s version of a spider’s web, waiting, waiting, waiting for us to land?

We came to Enceladus looking for life. Now with my last words I desperately want to tell the Earth, to warn them:

It has found us.

Liam Hogan is a London based writer. His Quantum Shorts winning story, “Ana”, appears in Best of British Science Fiction 2016 (NewCon Press). His collection of twisted fantasy short stories, “Happy Ending NOT Guaranteed”, is published by Arachne Press. Find out more at http://happyendingnotguaranteed.blogspot.co.uk/, or tweet at https://twitter.com/LiamJHogan

We hope you enjoyed this story.  You can leave feedback, questions, or comments at The Forums.