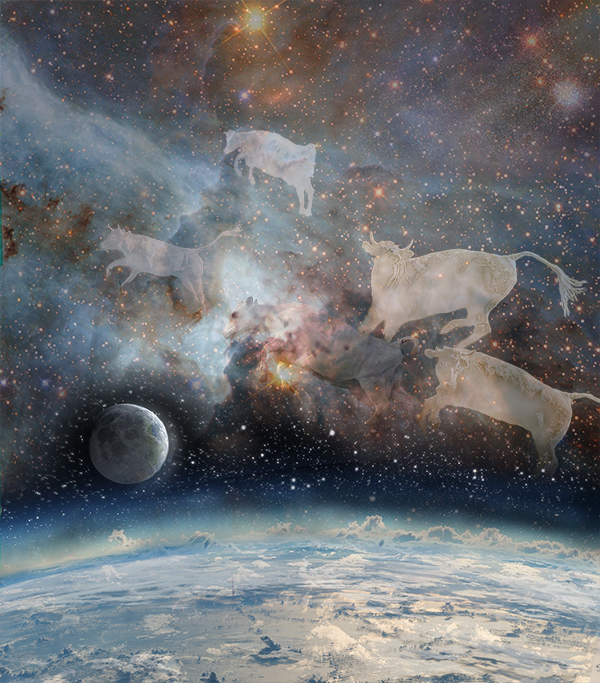 Back then ‘a course, nobody knew about ‘em. Out in space they look kinda hazy, so we figure there might always have been a few about, just blendin’ in with interstellar clouds. Once they started their great migration though, leapin’ over the Great Nebula Wall, there were great big incandescent herds of ‘em, streamin’ out across our local territories ‘til we couldn’t help but notice.  ‘Specially once they found planets they liked.  Then they kinda condensed to a more physically palpable form you might say, and nonchalantly set to grazin’.

They were quite generally beautiful creatures, and docile too if you didn’t provoke ‘em none.  And when people found out how to, so to speak, milk ‘em, well, that’s when the herdin’ started.   It was found they’d loyally follow the folks they’d grown accustomed to when they took off to settle another planet.  And then ‘a course space rovers figured some cow rustlin’ would be a good idea.

According to general knowledge, and my own experience, rovers take whatever’s not nailed down, then find a way to take that and whatever it was nailed down to.  They’d set out bait trails leadin’ the cows off into traps and haul ‘em off to a convenient hideout planet.  But that didn’t work too well in the long run, ‘cause the cows pined loyally away for the people they’d grown fond of, and eventually they’d de-condense and gracefully take off, and in such an incorporeal state, nothin’ could stop ‘em.

Now, at first no one thought of eatin’ ‘em, seeing as how beautiful and big-eyed they was, beguilin’ you might say, and we was already getting’ that mighty fine ‘milk’ that could be imbibed as is or, ahem, fermented into a form that left you pie-eyed and seeing auroras in mid-air.  And the women-folk loved spinnin’ that transparent fur like stardust and rainbows, if you can imagine such, (now sold back in the settled territories by the fancy moniker of ‘crystalline cashmere’.)  To clinch the deal was that iridescent somethin’ they gave off every time they landed on a planet and condensed their forms — delicious fresh, and like gems as it aged.

But eventually there’s always some fine gentlemen with twitchy knife hands curious to see what happens when they carve open another of the galaxy’s inhabitants, most especially ones they figure can’t carve back.  Thing is, once such gentlemen proceeded to satisfy their curiosity, they began to find out the many ways our peaceful friends could be unobligin’ —  avoidin’ the invitation to be served for dinner and servin’ out a fine retribution instead.

The method I observed as bein’ my personal favorite, and one a bit at odds with their heretofore noted qualities, was when a cow’d just shoot right up to their would-be assassin and puke all over ‘em this very special substance.  It smelled like moldy cheese sat out in the hot sun for five years and it stuck like tar from hell.  Didn’t have to ask such a fellow what he’d been doin’ lately…

That wasn’t enough to stop all enterprisin’ and well-prepared gentlemen though, and sometimes just plain affronted vengeance was on their minds.   Back whilst I was captain of the Sybele and marshal in the New Kansas territories, we were headquartered on the main transit planet of Doj, overseein’ the mostly transitory population and the migratin’ herds.  One day a deputy from the crew came in with the news.

I sighed.  One of the complications of watchin’ over frontiers was the sad lack of early warnin’ systems against visitors aimin’ to flatten the place you happened to be occupyin’.

“I figure they wouldn’t be landin’ without some such plans.  Tell the herds to take off.”

“Marshall, I did.  And they won’t.  And we ain’t got half the hardware that ship’s haulin’.  Looks like we’re dead for sure.”

“We won’t know that ‘til the smoke clears.”

I had a call put out for assistance, a warnin’ for civilians to stay indoors, and got the crew shielded, charged, and armed to their crooked teeth.  We went out to cordially greet our visitors, and possibly blow holes in ‘em.

I stood forward as they lined up in front of a ship bristlin’ with more firepower than five of ours and shields stronger than anything we could throw at them.  They did seem to intend imminent slaughter. Their captain stepped towards me.  I recognized him as a popular model for the Wanted posters.

“Alright Masterson.  You might be marshal of this territory, but you’re dead meat if you don’t stand aside.  We’ve got an example to make of these pukin’ critters.”

“Can’t let you do that McLaury.  We’re protectin’ these herds, and they’re free to roam and defend themselves as they see fit and necessary.  The law’s the law.”

“Don’t make yourself vulture bait over some moon-faced space cows.  We’re firin’ on the count of three, and if you’re still in the way, you’re fryin’ with ‘em.”

“Cogitate on this just a minute…”

“…You’re about to step over the line from jail time outlaw to slow hangin’ murderer.”

“And we’ve got auto-feed sendin’ an image of your most beneficent visage back to Central.”

He struggled a moment with what that might mean but I reckon his brain couldn’t hold a thought and the urge to kill at the same time so he dropped the thought and raised the gun.  I was afraid we were about to go down in a blaze conspicuously lackin’ in glory.

And in that fortuitous moment before any of us fired, the cows hit ‘em with somethin’ faster and stronger than anything we’d ever had the misfortune to lay eyes on.  They didn’t just leap at ‘em and puke.  No.  Quick as lightnin’ they leapt, swiveled head to toe, and let loose somethin’ fouler than all that was ever seen or smelled in the entire territory of all of the galaxy we’d ever roamed.  It went right through the rustlers’ shields, and unlike the comparatively perfume-like ‘cheese’, this stuff did not, as we found out with the passin’ of days, come off.  It just bonded stronger, looked uglier, and smelled fouler.  And though these men had been about to forcibly divide us into individual atoms, they had our sympathies.

And though those space cows settled back down right quick to big-eyed, docile, plant-chewin’ friendliness, we couldn’t help but tip-toe around ‘em just a bit from then on.

There was more trouble when the cows started loyally protectin’ their non-condensing animal compatriots.  Now you might think there’s not much they could do to discourage a palate informed by a million years of bloody carnivorous feastin’, but let me tell you, when you have some big space cow condensing all of a sudden outta nowhere, bellowin’ like a steam engine and chargin’ like a bull, eyes spinnin’ ferris wheels, hooves outstretched at ya and pukin’ enough moldy stinkin’ cheese tar all over ya to keep ya covered for a month o’ Sundays — ya sit up an’ take notice.

Some folks got riled, but, truth to tell, excogitate as they might, there was nothin’ they could do about it in the end.  The upshot was a lot of healthy but grudgin’ and cussin’ plant-eatin’ individuals.

What caused the most seriously vociferous objections was when the cows’ loyalty extended to protectin’ humans from humans.  People got fired up that cows from space were interferin’ with the exercise of our natural God-given right and free will choice to kill each other.  I could certainly see their point, philosophically speakin’.

Those who got most irate moved off to a big solar system they kept closely guarded and carefully alive with the traditional rights and ancient practices most dear to them.  I admired their stickin’ to their ways, and they did seem happy, but I turned down the invitation to join them as bein’ not entirely conducive to my own health and happiness.  They don’t get many visitors neither, ‘ceptin’ for the odd space cow with a sense of humor and quick get-away skills.

Now Gray, second engineer, emergency repairs specialist, and a man with a wild, space-eyed look about him, had from the first looked kinda sideways at the cows.  Said he didn’t reckon nothin’ that came in from over the far side of the Great Nebula Wall could end up doing us any good.  As their abilities and propensities became clear, he’d grown outright scared and hostile.  But he took to them real well after the incident which combined the two things he feared most mightily – space cows, and the empty void of absolute zero freezin’ space.

We were headin’ towards the third planet in Gamma Centauri, the herd was followin’ close, and Gray was out in a maintenance pod when the pressure lock blew and he got sucked out into space and went out cold.  The herd kinda froze for a breath and twinkled, then gathered close around him.  They formed a fine cobwebby haze and carried him along in the middle of it.  Ship’s sensors showed  a bubble of breathable air and warmth around him.

He came to, looked around, and screamed fit to bust.  He clutched onto half-formed cow fur, eyes big as saucers.  Then, as he realized the safe yet unique unusualness of his particular situation, he got the biggest, stupidest grin I have ever seen on a man’s face.   Ridin’ the cows through space became his travel mode of choice after that.  And though his wild, rovin’, space-eyed look occurred more frequently after that, it was less on the desperate side and more toward satisfied dreamin’.

Now this kindly ability of the cows made up for most of the grudges some people were holdin’ against ‘em.  Who wouldn’t love a creature that took you roamin’ wild and free through the stars?

And the cows?  Well, we see signs they’re readyin’ up for another migration.  They seem to be eyein’ the star fields toward that next nebula wall.  And us?  Maybe we’re lookin’ that way too.  Maybe, like Gray, we’re all getting’ a little space-eyed.

“Cows in Space” © J. Drake,  first published here in Cosmic Roots & Eldritch Shores on leap day February 29, of leap year 2020.
J. Drake lives in a highly mobile castle in the sky which occasionally lands in isolated areas good for communing with nature or in more populated places so that various activities nefarious and otherwise can be carried out.
Inspiration for this story came from an early episode of Castle, when Nathan Fillion dressed in his Firefly outfit and told his daughter he was a space cowboy.  When she said “There are no cows in space!”  I shot back at the screen “Oh yes there are!”,  and then the story almost wrote itself.