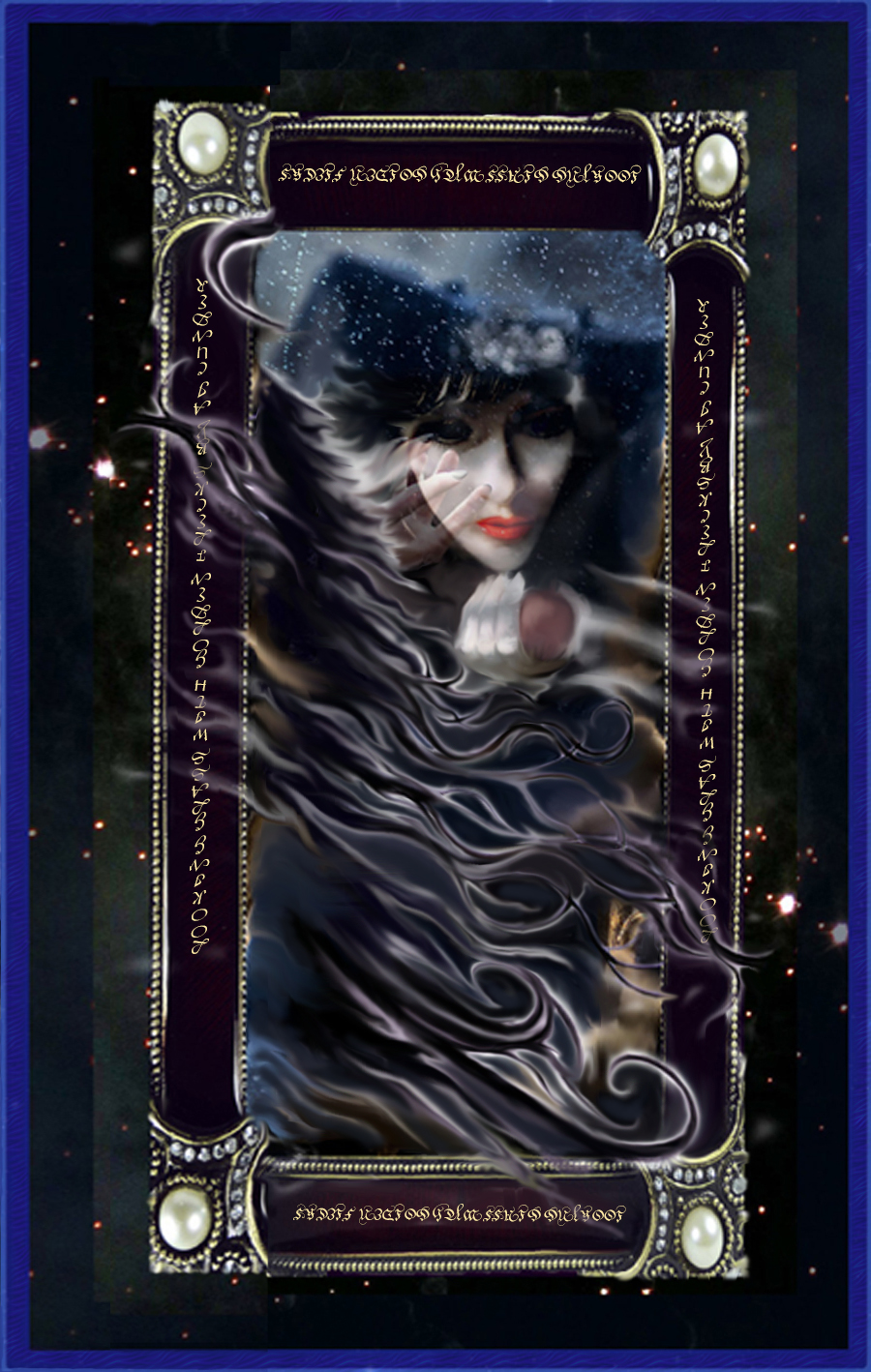 In the stillness before dawn, when the world sleeps save for fairies and magic, the queen stares into her mirror. Framed with petrified yew wood chased with gold, it reflects the bedroom with a shimmery haze, the queen listless on an oaken throne, eyes hollow. Eldritch characters glow along its edge as they did long ago, when as a young woman she took a wrong turn down her old village road and came upon an herbalist’s cottage…

The herb witch had scratched leather jowls, tightened her shawl. Searching for anything particular, dearie? A potion for dreaming? A salve for healing? A woven root bracelet to bring back memories?

But a mirror is what caught her eye, its surface cloudy and swirling, whispering Ceridwen, the etched script glimmering along its edge, pulsing like a heartbeat. Her breath caught.

The witch followed her gaze. Her eyes narrowed, flicked between the mirror and Ceri. She hooked Ceri’s arm, nails like daggers biting. Does it speak to you? she rasped, a sudden spark brightening haggard eyes. Take it. Free me from it.

Ceri reached for it, and the witch’s cheeks quivered.

You’ll see your futures there. Every path altered by each decision you make.

The witch hesitated. All the love you’d give, a loveless life you’d live. But what’s love against fame and fortune, knowing your future and how to find it?

Ceri stroked the cold frame. But where is your fame and fortune?

The herbalist licked her lips. For me, it lit the way to my power – which paths to take, which scrolls to read, which herbs to use. The outcome of every spell and potion before I crafted it.

Yet you wish to be freed of it.

My youth, my life drained away! Every choice, every decision, tied to it. Even now… She gazed at the glass, eyes glazing. She shook her head, tearing away from it and shuddering. I had a lover, once. He left because I never made a choice without the mirror. Good riddance, I thought. Her face twitched. But on bitter nights, when the mirror whispers through the frost, I feel no warmth in its embrace. And I wonder, how might things have been? But the mirror shows only what might yet be, never what might have been.

Not what will be?

The witch snorted. Only fools think fate is fixed. She leaned closer. You’re the chief blacksmith’s daughter, aren’t you? The old king’s asked for your hand, hasn’t he?

Ceridwyn turned her head away and shrugged. She clutched close her cloak.

Oh, you want to refuse. But here, see what futures the mirror can show you. Think of accepting the king’s offer, look at your reflection, and say,

Show me now what happens next.

The glass hummed. And in the mirror, in a shining palace, amid thrones, marble, and gold, dresses of fine silk, food that never ran out, an apple shimmered…

The queen blinks in her tower, brought back by the huntsman’s cough, the witch’s words still echoing in her head.

With his hunting knife he peels an apple, leaning against the cold stone wall amidst the detritus of a discarded life – dresses shredded and left in corners, dust and mold over chests and treasures, a sandalwood comb, a crown forgotten on the floor. The knife handle sits easily in his hand, red peel coiling in one long loop.

When she first invited him to share her bed — many moons ago, when she wore her crown and still ruled among the people — he stayed only for the night, a ghost when the sun rose. But over time, he spent his days with her too, secluded in the musty castle tower as ivy crawled up the granite. Sometimes he tidied her room. Sometimes he sat in silence with her for hours as she studied the mirror.

“The kingdom grows restless,” he says now, weaving through cobwebs to hand her a slice of fruit. “They fear their queen has taken ill. The servants flee the castle. You eat only what I bring. You stare into that cursed thing as though it were your ruler. As though it were your god.”

He calls you a thing. A cursed thing, the mirror hisses to her.

You see yourself, your perfect self. Just as I’ve always shown you.

The queen turns the apple slice over, thinks of eating it, then asks the mirror,

In the silver, the queen takes a bite of the huntsman’s fruit. Her reflection wipes the juice away, missing a droplet that stains the gown she hasn’t changed in weeks. Then the image fades and again shows the queen’s reflection, holding the crisp white slice. She devours it, wiping away the juice as it drips.

“Did you fear I poisoned it?” The huntsman takes a bite himself. “Would it have shown you if I did?”

“It would have shown me dead.”

“Like Snow White?” The huntsman peels tangled hair from her brow, her handmaidens long gone. He tries to step between her and the mirror, but she pushes him back. “You loved that girl. You’d play with her for hours in the halls and orchards, read to her in the sun and under the moon.”

“Once upon a time. Then the mirror showed her ruling in my place, the kingdom adoring her instead of me.”

“It poisoned your mind. And then you poisoned her.”

“The mirror showed her lying still.”

“But not being wakened by the prince.”

“It showed me still queen.”

“But not your lonely kingdom. It hid an empty home, a hollow heart. Though it cannot lie, it can deceive.”

“Maybe it will show me Snow again, if I look long enough. Maybe I can tell her…” She scrapes a curling nail along a well-worn groove in the armrest.

“Is that what you’re always looking for?”

The huntsman moves to the window, leaning over the ledge. For a moment, the mirror shivers, and in the glass, it looks as though he might tip over. “What about,” he says, “the message from the prince? The invitation to Snow’s wedding?” He tosses his apple core into the open sky.

The queen leans in, the mirror drawing closer, touches her finger to the smooth glass that throws back an offset image. It doesn’t catch the lines that crease her face, the white that streaks her raven hair, the soiled spots spreading across her robes.

“Why don’t you go?” The huntsman flashes a smile while his reflection frowns.

“Is that wise? All my futures lie here behind the glass. What if it’s stolen while I’m gone?”

“Your futures lie in you, not in that glass. Go out into the light – reconcile with Snow. She is your daughter.”

Stay, the mirror says, brightening the room in the glass with a ray of crafted sunlight, a gentle breeze swaying the drapes, the dust turned to glittering diamond.

“I’ll help you dress,” the huntsman says. He sifts through her wardrobe, holds out a dress of once-exquisite black satin embroidred with scarlet, the least moth-eaten of her clothes.

The mirror shivers, adding stains and moth holes to the fabric.

But the queen thinks of attending her daughter’s wedding, leaving the shadows, breathing fresh air, and says,

The queen in the mirror rises, puts on the satin dress. She leaves the castle in a half-rotted carriage, wheels creaking on rusted axels. She reaches out to touch green forest foliage as she passes, looks up at a cerulean sky. She arrives at the prince’s palace, brushes past the stares of guests and nobles, weaves through their whispers with the huntsman at her side. She fingers the tarnished silver circlet perched on her head, as though reassuring herself it hasn’t fallen.

She approaches her daughter of snow and blood and ebony who steps down from the dais and looks upon her with cold eyes. But something stirs in the queen’s heart, a flutter long forgotten from the days before the mirror. Head bowed, she whispers of sorrow and regret and love. Snow’s eyes soften; she reaches out. Their fingers touch and the queen in the tower gasps as though she can feel her daughter through the glass. But then the prince cuts between them, a scowl on his face, gesturing for the guards to escort Snow away. The reflected queen glimpses the throne room doors closing as Snow throws back a final glance.

The prince claps hot metal shackles on the queen’s ankles, strips the diadem from her head. Wedding guests jeer. Six palace guards restrain the huntsman. The queen’s fingers contort, her magic holding off the heat of the scalding iron as she works a spell.

She thinks of her daughter, and with a final wave of her hand, writes three words on the castle walls — Love, Now, Forever — indelibly in snow and blood and raven’s feathers. Then, the last of her magic spent, her flesh crumbles to dust and her bones clatter to the floor, crown spinning.

The mirror shivers, and casts a blood-red shade upon the scene, whispering, see, see what awaits if you leave?

“My queen! What do you see?” the huntsman asks.

But the queen only shakes her head and shudders. She thinks of ignoring the prince’s invitation, staying in her castle, and asks,

And the queen’s reflection remains rooted in the room, staring through the glass, fingers tightening around the rotted oaken throne.

Safe, the mirror promises, here with me. But it cannot hide the crumbling walls, the queen’s mouth moving silently. And though she can’t hear the words, the queen in the tower knows her future self repeats,

endlessly as moss eats the stones and the huntsman leaves, comes back, leaves, comes back, his beard gray, at last taking his axe and smashing the mirror even as the queen struggles to restrain him, clawing, fighting to protect the mirror even as he strikes again, a hundred fragments flying, the mirror shrieking, an ancient spirit fleeing, fattened by lifetimes of leeched love, a hundred women’s lives in each shard as the queen kneels in the razor-edged glass, hands and knees bleeding, endlessly searching for her futures among the deadened slivers.

“My queen?” the huntsman asks. “Have you decided?”

Slowly she stands, shedding her tattered robe. “Give me the dress.” 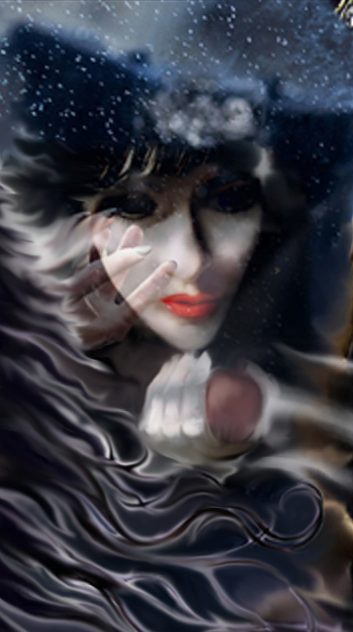 AJ Cunder — A medievalist, a type 1 diabetic, and a cyber crime investigator, A.J. graduated from Seton Hall University with a Master’s in Creative Writing. Publishing credits include Mysterion Online, Fractured Lit, and The Modern Deity’s Guide to Surviving Humanity, among others. He currently serves as a senior editor at Flash Fiction Online, an assistant editor for myths, legends, and fairy tales at Cosmic Roots & Eldritch Shores, and on the editorial staff of Metaphorosis Magazine. Find him on Twitter @aj_cunder, or online at www.WrestlingTheDragon.com.