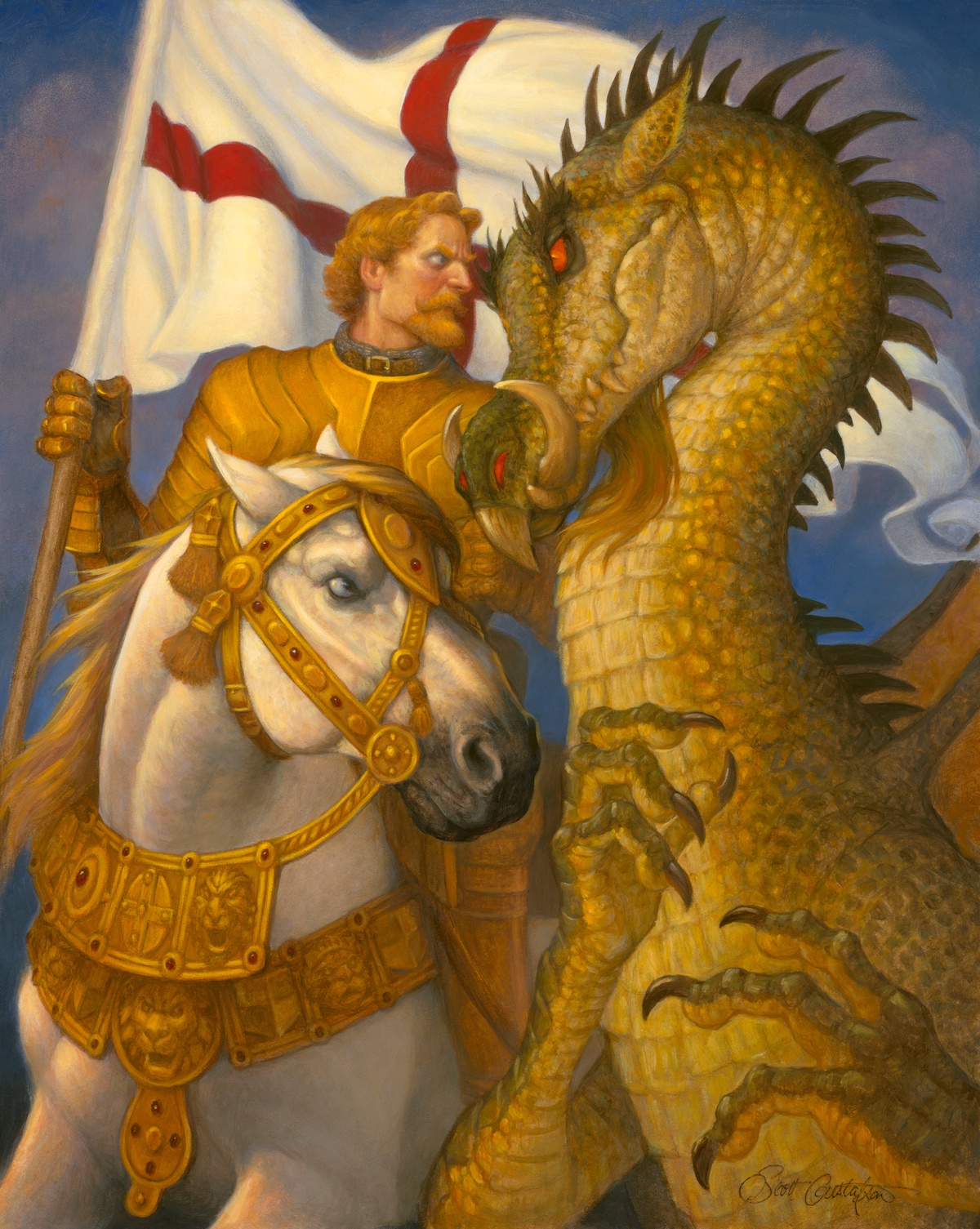 The Trial of St. George

“What in blazes is this?” bellowed St. George.

Reginald Thorpe-Jones, Barrister, paled slightly. “My dear George, calm yourself. I’d expect that as a saint you’d be rather unflappable.”

The aging knight waved a document at him. “As a saint my patience has not just been tried, it’s been snapped altogether. Read this and see if I don’t have a reason to be furious!” With a sword-like thrust he held the paper out for the barrister’s inspection.

Thorpe-Jones studied the document carefully. A deep frown grew on his brow.

“I’m afraid this is quite serious, George. You’ve been charged under the Endangered Species Preservation Act with willfully and maliciously causing the extirpation, within England, of Draco Vulgaris, otherwise known as the Common Dragon.”

“Poppycock!” exclaimed the irate Saint. ”When I killed the last dragon in England I got sainthood, and dinners, and cutting ribbons, and television talk shows. Now things have settled down, Susan and I were beginning to enjoy my retirement. And that fellow had the cheek to serve this summons at my club!”

“Unfortunately, George, it’s not Poppycock. Environmentalism is all the rage now. This law was passed by Parliament two months before you slew that final dragon. I suspect this is a test case. Why don’t you just go home and relax? I’ll ring you up when I’ve developed a strategy.” Gently but firmly, Thorpe-Jones escorted St. George to the door.

St. George had little idea of how to relax. He took to wandering about the castle all hours of the night. In his armor. The clanking got to be a bit much for his wife.

“Yes. He’s insisted I be tried by my peers. But I doubt it will be as hard as he thinks to find twelve saints to make up a jury. The Church makes out quite well on sainting people.”

The jury looked on with saintly patience as the trial progressed.

“Bishop Thumbshute,” said the Crown Prosecutor, “did you preside at the canonization of St. George last November?”

“Did the canonization require an examination of St. George’s accomplishments?”

“Yes, of course,” replied the Bishop.

“Did you conclude that he had, in fact, slain the last remaining dragon on English soil?”

“Certainly,” answered the Bishop. “My staff researched this most diligently. Destroying the last of these monsters was a cornerstone of his eligibility for sainthood.”

The Crown Prosecutor swooped in on the Bishop, and fixed him with an accusing stare. “Did it not occur to you, Your Grace, that you were encouraging reprehensible, morally bankrupt, and unlawful behavior by honoring a man for slaughtering the last of an entire species of one of God’s creatures?”

“Certainly not,” the Bishop responded coldly. “That dragon had been terrorizing my diocese. It ate only virgins. Before St. George arrived, virgins were extinct in my diocese.”

The Crown Prosecutor was shocked. “The dragon ate them all?”

“No. These young women developed a rather clever practical solution. They…” the Bishop cleared his throat, “ensured that they were not virgins. I suspect that without St. George, the dragon would have starved to death. As it is, I can encourage my priests to promote sexual morality again with a clear conscience.”

“Have you seen today’s lot?” shouted St. George, clanking into the castle with an armload of tabloids.

“No, dear,” replied Susan over her knitting. “And I don’t think you should look at them, either. They’ll play havoc with your blood pressure.” And thank goodness you never learned to use the internet!

“But these are intolerable!” exclaimed the saint. “Listen:

“Really, George,” said Susan. “I wish you’d throw those on the fire. Or at least recycle them. They’re not doing you a bit of — “

‘SEXY SAINT SAVES SWEET SIXTEEN. Yorkshire girl reports she was rescued from a fate worse than death by St. George himself, who saved her by removing her virginity. “He was wonderful,” she told reporters. “He saved me five or six times that night.’

Can you imagine?” he sputtered.

“No, I can’t,” murmured Susan. “The girl clearly doesn’t know anything about you.”

St. George hurled the paper into the fire. “My reputation is ruined! They’ll un-saint me! What am I to do?”

Susan put down her knitting and comforted her husband. “There, there, love. Why don’t you go down to Reg’s club, and see how things are coming along? He’ll have some good news for you.”

“I can’t understand why things are going so badly,” said Thorpe-Jones, staring into his fifth brandy.

“What do you mean?” asked St. George, who had lost count of his own brandies.

“That Crown Prosecutor, Smythwick. I’ve known him for years. He’s a gormless idiot. Not an ounce of native wit. But throughout this trial he’s outmaneuvered me at every turn. He’s been one step ahead all the way. He’s anticipated every argument and countered with unassailable replies. He’s closed every loop-hole with great skill. If I didn’t know better, I’d suspect someone in his office had suddenly developed intelligence.”

“One step ahead, you say?” remarked St. George, swaying. “Sounds like fighting a dragon. Crafty beasts. Once they start talking, you’re lost. You must strike immediately. Many’s the knight done in by letting a dragon get a word in first.”

“My Lord, I move that all charges against the honorable St. George be dropped,” said Reginald Thorpe-Jones.

“On what grounds?” asked the judge.

“He did not kill the last dragon in England.”

Smythwick shot up. “My Lord, is he… is he saying the Church, the bishop, is lying?”

“Not at all my Lord!” rapped out Thorpe-Jones, “Rather it has come to my attention that the Crown Prosecutor’s Office has in its employ an individual named Bertram. I hereby submit photographic evidence, taken yesterday, of Bertram, at a seriously undersized desk, in the prosecutor’s office.”

Studying the photograph, the judge intoned, “Mr. Smythwick, what have you to say to this?”

“And there, my Lord,” crowed Thorpe-Jones, “we have a more typical Smythwick response.  The photograph shows Bertram, one Draco Vulgaris, and very much alive. This Bertram, having been hatched in Cornwall, is by law an English dragon, despite Cornish political ambitions. St. George has not caused the extinction of the English dragon.”

Smythwick’s mouth opened several times before any words came out. “I never really spoke that much with Bertram… He looks different in person.”

The judge frowned down at him.

Smythwick wilted. “The Crown is prepared to drop all charges.”

Susan found her sainted husband leaning out a crenelation, gazing far off across the moon-lit woods. “Come down to the ballroom, dear,” she said. “Everyone wants to congratulate you on winning your court battle.”

“What’s the point?” said St. George. “There’s still a dragon out there. If I don’t slay it, I’ll lose my sainthood. If I do slay it, I’ll end up in court again.”

He gazed even farther off.

“The church also has a slight conundrum. As our infallible research tells us, there are no English dragons left. And yet, there is … Bertram. I’ve spoken with the Archbishop, and he has ruled that the dragon’s employment in a legal capacity makes this a special case. As a lawyer, Bertram’s depredations will be no worse than those normally found in the legal world. He is no longer your concern.”

St. George looked at the bishop with amazement. “I don’t have to slay this dragon? I can keep my sainthood?”

“In the eyes of the church, you have nothing to slay. By becoming a lawyer, the dragon became extinct, morally speaking. Your job is done.”

Susan reached out. “Now, George, will you come to the party?”

As they descended the turret, he remarked, “But you know, doesn’t that mean there might be even more dragons lurking about?”

Bishop Thumbshute shook his head.  “Our research is quite infallible.”

“The thing is… ” St. George continued, “instead of fights to the death, sometimes, a dragon and I would come to… more civilized arrangements.”

“I don’t think I quite heard you – over the sound of all those people waiting to congratulate you,” the bishop replied mildly.

St. George paused, then accepted his fate with saintly forbearance and continued on down the turret.

“The Trial of St. George”, © Andrew Jensen.  First published here in Cosmic Roots & Eldritch Shores on April 23, 2022
Andrew Jensen lives in rural Ontario with his family and too many dogs and cats. He is the minister at Knox United Church, Nepean. Over twenty of his stories have appeared in Canada, the USA and New Zealand. His book of church humor is now, sadly, out of print. Andrew plays trumpet, impersonates Kermit the Frog, and performs in musical theatre. You should have seen him as Henry Higgins . . .

Lead illustration is the original prize-winning oil on panel painting St. George and the Dragon, © by Scott Gustafson,  All rights reserved. Please visit his site at www.scottgustafson.com where you can see more of his beautiful work.