“Am I being charged?” Morwenna asked, with a flourish of hand that set a cluttered charm bracelet to rattling. “I’ve been here for hours.” If she felt any angst, it was well-disguised. She stepped without hesitation into the cold, grey room. As she spun to sit where the detective directed, her green and orange skirt billowed out and he felt it slap lightly against his legs.

She sat and smiled at him from across the table, with puppy-dog eyes and movie-star ruby-red lips. “What is my crime?”

He wore his embarrassment in the flush of his cheeks. “Some say you practice witchcraft,” he replied. “We’ve had complaints.”

“A witch. How interesting. Am I to be burned at the stake?” She laughed then, not an air-rending cackle, but a warm laugh somewhere between joy and mischief.

“It isn’t funny,” he said. “Frankly, I think you’re a con artist. I could charge you with fraud; using deception to obtain an advantage from another person. Let’s talk about that.”

“That sounds boring. Let’s talk about witchcraft.” She placed her elbow on the table and rested her chin in the palm of her hand. Not for a moment did her gaze leave his eyes.

A second detective entered, and taking a seat beside the first, he set down a plastic evidence bag and tapped it.

“What’s this?” he said, and eyed Morwenna with obvious suspicion.

She shrugged. “A chocolate box.” There was nothing more to be said. It was her chocolate box, polished oak, carved with the plants of the forest, and passed down from mother to daughter across the centuries.

“To store the chocolates I make.”

“Don’t get smart with us.” The second detective said sharply.

Morwenna decided not to like him. She sighed. “It’s a chocolate box. I make specialty chocolates, tailored to my clients, and I keep them in this box until I deliver them.”

“There have been suggestions,” First Detective said, “that you put a spell on these chocolates.”

“That you lace them with drugs,” snapped Sharp Tongue. “That you drug your victims and, while they are in this altered state, you coerce them into giving you what you want.”

“So I’m a chemist then. I’d rather be a witch; so much more exciting. Who have I put a spell on?”

First Detective spoke softly. “We have a complaint from an Anthony Ducell. He says you put a spell… um, drugged him and fleeced him of thousands of dollars.” He looked her in the eye, held her gaze, and she rewarded him with a smile.

“Oh, sweet, sweet Anthony.” Morwenna appeared to be lost in memory. “Such a compassionate man. He was so sympathetic to the sufferings and misfortunes of others that he cried when I told him about little Molly Saunders. I made Soft Strawberry Cupcake for him. Yes, that was definitely his flavour.”

Sharp Tongue took no pains to hide his impatience. “And who is Molly Saunders?”

“Molly Saunders,” Morwenna said, “is the beautiful little girl that Anthony saved. If he hadn’t put up the money for the treatment she needed, that poor child would have died before she reached her fifth birthday. And it’s funny you should bring him up, because Molly’s parents emailed me just the other day. They want Molly to meet Anthony, and the TV news wants to film it. Anthony is their hero.”

“Really!” Sharp Tongue was clear in his disbelief.

Morwenna threw him a dismissive flick of her wrist and the charm bracelet rattled. “I know Anthony,” she said. “His heart will melt all over again when he meets Molly.

“We have another complaint,” First Detective continued, “from a Derek Simpson. He claims you robbed him of a business opportunity. He says he succumbed after eating your chocolates and agreed for you to be the middle-man in a business transaction, but you never passed his money on.”

“What did you do with his money?” Sharp Tongue didn’t speak words, he spat them.

“Poor Derek.” Morwenna shook her head. “He’s a good man, but so wild. Did he tell you he traveled the world before he was twenty-five? His adventures make quite a story. But he’s not twenty-five any more, and he has a wife and two beautiful little children. A wife and children almost lost to him because of his irresponsibility. I made Cranberry Bomb Surprise for him, that was his flavour then.”

Sharp Tongue slapped the table. “I’ll ask you again — what did you do with his money?”

Morwenna stared into his eyes and she saw no good there. “I paid it into his mortgage,” she said. “That business opportunity was a Ponzi Scheme. He would have lost everything, and not for the first time. He was already behind on the mortgage. His wife Carrie couldn’t take it any more and she told him she would go if he did it again. She was so happy the money went to the house she gave him another chance.”

First Detective smiled but Sharp Tongue puffed his bitter exasperation into the air. Morwenna leant sideways to let it pass. If she were to make chocolates for Sharp Tongue, they would be Salted Caramel with Crystalized Lemon. That was his flavour.

First Detective looked at the magnificent oak box in the evidence bag. They had tested the box for drugs and found nothing. He seemed unsure or unwilling to proceed.

Sharp Tongue slid the file over and studied it. He turned a page over and then turned it back again. “Let’s talk about Sergio Camilleri,” he said.

“Sergio would like that,” Morwenna replied. “He’s a prideful man and he likes being talked about. I was so worried about Sergio. He saw himself as an Adonis, and valued his own opinions above all others. I made Cherry Liqueur Panache for him; that was his flavour then. He was so wrapped up in himself he couldn’t see he was pushing everybody away. He was destined to be a lonely man.”

“What did you do with his money!” Sharp Tongue slammed his fist on the table. First Detective flinched, Morwenna did not.

“I booked him into a mindfulness retreat. It’s just what he needs, a chance to find himself, to uncover his true values and learn to live a meaningful life in harmony with the world around him. Of course, I didn’t expect him to be happy about it at first. In fact, he went up there and demanded his money back, but after Alena showed him around and had a chat, he stayed. Alena keeps me posted, Sergio’s doing exceedingly well.  Finding calm and happiness.”

Sharp Tongue stared at Morwenna. Negative energy oozed from his pores and trickled into the room. He wore his anger in his narrowed eyes and rutted forehead. They had checked her bank accounts. None of the money had ever been deposited and her lifestyle showed no signs that she had spent it. There was no evidence beyond the victim’s claims.

“Ask any of them. Now they have no complaints. So… am I under arrest?”

“We’ll look into what you’ve told us,” Sharp Tongue’s voice cut sharp across his lips. “You can go for now.”

Morwenna stood. “May I have my box back?”

Under the startled gaze of Sharp Tongue, First Detective took the box from the plastic bag and handed it to her.

First Detective saw Morwenna as he left work for the afternoon. She was waiting at the bus stop, singing a song and swaying her hips to the tune.

“Can I give you a lift somewhere?” he asked.

He wondered how she knew his name. He followed her directions, her presence in his car all-consuming, and when they arrived, he wished the trip had been longer.

“Where are we?” he asked. They had stopped in a small industrial estate.

Morwenna pointed to a building, the only one with an open door. “It’s a boys’ workshop,” she said. “We bring street kids here and teach them to make things. Right now, they’re working with Friends of the Callow River Reserve, making possum and bird boxes. It keeps them off the streets and gives them a way to contribute to the world. They’re achieving things and being recognised for it.”

“You run this?” Peter could not disguise his interest.

“Me and a few volunteers,. But we need more help. Someone with access to community and resources.”

“I could do it.” He didn’t hesitate. “I’ve been looking for something like this, something worthwhile.”

“I knew I could count on you,” Morwenna replied, opening the oak box. “Have a chocolate.”

He reached inside, took out a Milk Chocolate Heart, and forgot the box had been empty. 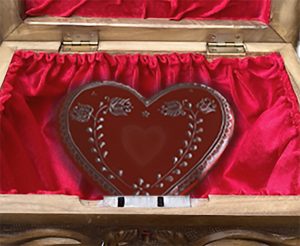 “The Oaken Chocolate Box”  ©  Gayle Beveridge.  First published here in Cosmic Roots & Eldritch Shores, October 20, 2022
Gayle Beveridge is a past winner of the Boroondara Literary Awards. Her work has appeared in Award Winning Australian Writing, Vegemite Whiskers and Mosaic. Gayle is passionate about family, writing, photography, and with Victoria’s beautiful Bass Coast which she now calls home. In a past life Gayle was an accountant, but now she is free to write.