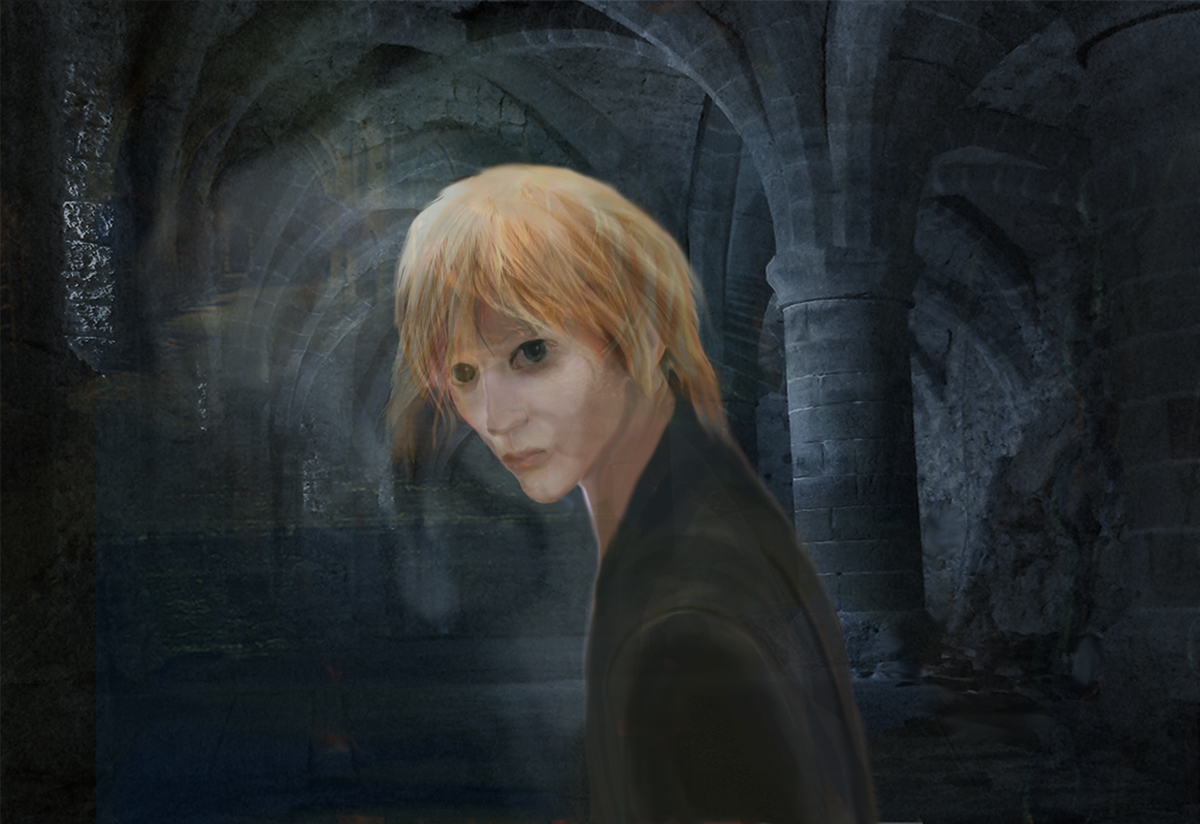 If you tip water into my mouth, I will drink. If you place a morsel of food in my mouth, I will chew and swallow. These are involuntary actions. Necessary, but of no importance. They do not distract me from my purpose, which is to think.

I was trained from an early age to perform this function. Trained to memorise, to calculate, and to compute. My brain has been honed into a perfect machine, dedicated to solving the King’s problems, however banal.

I do not need light to think. I do not need soft beds, or fresh air, or music. I avoid these distractions by operating in a room deep beneath the castle. Once, it was a wine cellar. It is dark and stays the same temperature all year round. The single entrance is kept locked and only those with legitimate access are permitted to enter.

I do not sleep while I am thinking. I am trained to rest different parts of my brain so as to keep a chain of thought alive. But when I have no problems to solve I do little other than sleep. It allows me to build new connections between data and conclusions and helps me to tackle future problems.

I woke from such a sleep as the cellar door creaked open. A light approached, a candle in a pewter holder, painfully bright to my sensitive eyes.

I did not recognise the girl who stood before me.

“Are you the King’s Computer?” she asked.

“And you can answer any question?”

“No,” I replied. I could have left it at that, but if I have a fault, it is pride in my abilities, so I explained to her why her question was wrong. “I am not omniscient. Some questions require information I do not have and so I must ask for that information before I can answer.”

She nodded. “What is love?”

It was not the sort of question I was asked.

“That is your question? What is love?”

She held my gaze unabashed. “Yes. What is love? How long does love last? And how do you know when you are in love?”

“I will need to think about this,” I said.

She gently inclined her head and turned to go. “Wait!” I commanded. “I need to know what level of priority this question has in case other demands are made of me.”

She brought the candle closer to her hand and I saw the oversized signet ring that her slim finger bore and as she left I settled into my thoughts.

She returned 12 hours and 34 minutes later.

“How are you getting on?” she asked.

I paused a moment before answering, uncertain what to say. “It’s a tricky one.”

I had not rung the bell. There was nothing I knew for certain that I needed. But she was offering me information. “I need to know the average dowry of a farm girl. The number of silk favours displayed during the last Michaelmas joust. The increase in the number of apothecaries on Downham Row since last year.”

She laughed, a light musical laugh. “Very well. I shall try and find out for you. Anything else?”

I did not know what else I needed.

She looked up at me pityingly. “You do not know these things? The evil of it! But I hear someone coming, I must go.”

She slipped into the corridor beyond the door and I heard muffled voices, coarse laughter, the sharp retort of a slap. The door opened again and two of the Advisor’s clerks bounced into the room.

“My, that’s a mighty fine piece of ass!” one said as he rubbed his reddened cheek. “I wouldn’t mind being the King for a day. I’d return her little love tap in spades!”

“Jack, you don’t half pick ‘em,” said the other as he laid a few scrolls on a desk by the door. “If it ain’t the nearest gutter-wench it’s a mountain Princess who’d fillet you before she’d give you the time of day.”

“Whatd’ya mean? She’s a mere slip of a girl. Feisty, but give me a couple of hours and I’d have her eating out of me hands.”

The one who was not Jack scoffed. “She’s more likely to serve your hands to you for dinner. I hear that where she’s from the lady-folk keep wickedly sharp daggers in their pants. The King won’t let her near him until she’s been thoroughly strip-searched. Now THAT I would like to see! What was she doing in here?”

Jack shrugged. “Beats me. I wouldn’t want to spend any more time down here than I have to. Gives me the creeps. Shall we get on?”

They asked me a dozen petty questions about the state of the Armoury and the number of Men-at-Arms that could be levied. I refused to answer, telling them that they would have to wait. They called the Advisor, who shouted at me and threatened to deprive me of food, but to no avail. So he called the General.

“What’s all this?” the General barked. “Bloody Advisor messing with your head again? He shouldn’t be allowed to look after someone as valuable as you, my boy! But we’ve work to do, so let’s have no more nonsense. The mountain tribes are amassing on our borders, come to rescue their damned Princess. Never seen so many of the blighters! So, we need to come up with a plan-”

“I am already working on a question,” I interrupted.

He laughed, a deep booming noise in the small confined space. “Never mind that, my lad. Here’s my ring, so clear the decks! Now, their army is 20,000 strong—”

“The question I am working on takes priority,” I told him.

He stopped, turned and stared at the Advisor, who blanched. “I know nothing, General Sir. But the only person with higher authority than you is the King.”

The General drummed his fingers on the pommel of his sword.

“Well,” he said, “If the King…” and then he abruptly spun on his heel and marched out.

I ignored the harsh words of the Advisor and, when he began slapping me and stars appeared before my eyes, I ignored those as well. Eventually he too left.

She returned as promised, 11 hours and 13 minutes later. All day long I heard construction noises in and around the castle and I wanted to ask her what the commotion was. But it was not pertinent to the problem.

She told me what she’d learnt about the dowry, the favours, and the chemists, though none of it was important anymore, as my calculations had moved on from there. And then she stood on her tiptoes and pressed something between my lips. An intense burst of bitter-sweet flavour flooded my mouth. I rolled the slowly melting ball around, feeling it coat my tongue and my teeth.

“That,” she said “is chocolate. The best there is. None of this valley rubbish.”

I swallowed hastily. “I did not need to taste it. I merely needed you to describe it to me.”

She laughed again, the same lyrical laugh. “Some things can’t be described. Like this.”

She bent forward, raised the candle, and gently blew. Warm air spilled over my bare arm and the hairs twitched and then stood upright. I looked down in wonder.

“So,” she asked quietly. “Do you know the answer yet?”

“Oh?” she said, her eyes twinkling in the candle light.

“It is not oysters, or powdered rhino horn, or any other aphrodisiac. It is not a magical enchantment, or chemical potion.”

“No,” I agreed, emboldened. “I know also that it cannot be imprisoned, or forced. It is not a matter of convenience, it cannot be arranged, bartered, or planned for. And it does not know rank, or race.”

“You’re getting closer,” she said and I felt warmth at her words. “But I think you need more inspiration.”

She took a wet sponge from a leather bag and mopped my brow, the coolness of the water startling me. She crushed lavender in her petite hands, the smell infused the air, briefly banishing the stale mustiness. And she danced for me, her shadow cast by the solitary candle weaving itself into my consciousness.

“Why do you spend so much time with me?” I asked.

“Because I want to,” was her simple reply. “And because only in your cell am I not treated as a prisoner.” She stopped her swaying and drew a delicate finger across my cheek. “Ahh, I wish I could spend even more time with you. But I will be missed, however chaotic it is up there and when they come looking, they must not find me here. So farewell, King’s Computer.”

I… I lost track of time. Something I had not done since I was a child, forced to count the grains of sand in a thimble, while declaiming in Greek. All I could think of was the touch of her hand.

So I don’t know exactly when it was that the King stormed in.

“They tell me–God! It stinks down here!” He waved his nosegay and turned on the Advisor. “You loathsome reptiles, do you never give him a wash? At least someone has had the sense to strew lavender.

“So, you won’t take orders from anyone but me. Well here I am, and here’s the situation. The General rode out to meet the advancing army last night and was soundly defeated. He told me you’d given him an unbeatable strategy, whereas the Advisor says you did nothing of the sort. Damned fool! It’s a good thing he’s dead otherwise I’d be wearing his hide right now. The heathen rabble advance on and I won’t rest until their whole army fertilises my fields.” He paused. “Which is the problem. Only a few of the General’s men made it back. We’re prepared for a long siege but I’ve no intention of spending the rest of winter a prisoner in my own Kingdom! So, compute. We have a dozen trebuchets and half that number of siege machines. Not sure what use they’ll be, but…”

The King stopped mid-word. A smile exploded across his bearded face. “I knew it! Never let me down yet! So, what’s the plan?”

“First, release the Princess. Send her with a small escort to meet the approaching army.”

His face turned red, his meaty hands formed fists. And then he slowly relaxed. “Well. There are plenty more where she came from, especially if it will secure the destruction of their forces.”

He turned and snapped orders to his Captain of Arms, who departed rapidly up the stairs.

“And next?” he asked eagerly.

“Throw open the castle gates. Better yet, sever them from their chains and allow them to fall into the moat.”

He smiled. “Ah, I see a ruse coming. A master stroke, yes? A feint–the castle becomes a steely trap? Cunning, very cunning. Where’s the Captain? Blast it–Advisor! see that it is done!”

The Advisor nervously adjusted his cloak. “But sir…”

“Now goddammit, or I’ll be wearing your hide instead!” the King roared, and the Advisor fled.

“And the final part?” the King asked once we were alone.

I calculated. The Captain would take time to select the escort, uncertain how well the mountain tribes would treat them. And the Advisor would need to call upon armed guards to convince the Gate Master to do as he requested. But none of that mattered, because the Advisor in his haste had slammed the cellar door shut and it only opened from the outside.

I stared down at the crushed lavender and awaited my fate.