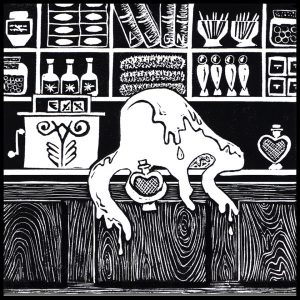 Xyblik’s Cosmic Emporium had stood for as long as anyone could remember at the corner of Elm Street and Hillside. The proprietor was an Old One, all writhing tentacles and slime, who bubbled cheerfully at his customers and loved nothing better than a good gossip with anyone coming in to buy bags of moondrops or packets of eldritch biscuits. Abby Dimmock took this into consideration when pondering the best time to purchase a love potion, although time often ran strangely in Xyblik’s shop. He would chat if she came when the Emporium was empty, and she was in no mood to chat about the sorry state of her love life. But better that than asking for a love potion in front of fellow townsfolk on a busy Saturday afternoon.

She winced as the cracked iron bell at the doorway tolled, announcing her entrance. So much for subtlety. She looked around and saw no other customers amidst the shelves of dusty bottles, lead-sealed urns, dark orbs, mysterious curios, and occasional bright and entrancing items such as the ineffable feathersquid, where her gaze lingered longingly.

“Ah, Dear Lady Dimmock!” Xyblik greeted her brightly from the high counter of polished mahogany. The air sac within his semitransparent greenish body swelled and pulsed as he spoke, amplifying his voice to a volume and timbre suitable for Dark Proclamations. “What service may be rendered unto you on this fateful day?”

“I’m looking for a love potion, please,” she mumbled.

“What’s that? A Potion of Inexorable Love?” the Old One bellowed, making Abby grateful she was indeed the only customer in the shop. “Surely you need not such uncanny power to sway the heart of man.”

Abby thought wistfully of Charlie Godwin, the new math teacher at the high school, who seemed so sane and sweet and funny… and so diffident. The chance that he would approach her, or that she could engineer a better acquaintanceship with him, seemed dismal. These dispiriting reflections made her a little blunter than usual. “Xyblik… I’m 42, it’s been years since my last real date, I don’t like bars or the men who hang out in them, and the thought of being swiped over endlessly by potential internet stalkers does not appeal. Now I’ve finally met a man I like, and I do not want to waste this opportunity. So I would like a love potion, if you please.”

The Old One oozed forward confidentially and lowered his voice to a softer boom. “Pray tell, what man is this of whom you speak?”

“I’m not sure that’s any of your business!” Abby returned tartly, “Everyone knows you’re the world’s worst gossip!”

A fountain of bubbles rippled up inside Xyblik. “Verily, you speak sooth, Lady Dimmock,” he chuckled. “Guilty as charged. Yet I have known you for most of your years on this plane, and my only desire is to further what happiness such a brief span as your mortal life may encompass.” A sympathetic tentacle writhed toward Abby and the deep voice grew more plangent. “For many long millennia have I observed the love affairs of mortals, and I judge not that this unnatural elixir will bring you True Happiness.”

A disapproving gurgle shook Xyblik’s gelatinous frame. “I should be loath to see you destroy your peace with such a baleful brew. Consider well whether you could truly be content, ever fearing that the love you were given was yours only by compulsion. Surely true happiness can come only with the love of free hearts freely bestowed.”

“So why sell love potions if they’re so ‘baleful’?”

“Alas, even such as I am not mighty enough to withstand the insidious force of Expectation. Who would respect a Cosmic Emporium that trafficked not in arcane tinctures, cryptic tomes, dark talismans, and otherworldly relics?” He waved a dripping tentacle at the rows of shelving around him. “Marketing, Dear Lady. Marketing. But I repeat that surely you need not such uncanny power to sway the heart of man.”

Abby sighed. “All right, Mister Dark Lord of All Advice, what do you think I should do instead? Because I want to get this right.”

A phosphorescent glimmer twinkled across the expanse that would be Xyblik’s face, if Old Ones made of tentacles and slime had faces. “Disclose unto me, Dear Lady Dimmock, what item of all that may be found within this wondrous Cosmic Emporium would make your heart truly gladdest.”

“Oh, so you do want me to buy something?” But the Old One’s earnest and meaningful look made Abby give his request the consideration he clearly sought. “I don’t know, you have a lot of ‘wondrous’ stuff. The tenebrous hand lotion is so soothing. The Cimmerian peanut butter is the best I ever tasted…”

Her eyes travelled around the dark, crowded shop, over all the strange and fascinating items that lurked in the shadows and had tempted her through the years. Scrolls teaching arcane knowledge or magic skills… cloaks of power granting invisibility or armor plating or eternal warmth… intricate crafts from other planes of existence… Then her gaze stopped. “I’ve always wished for an ineffable feathersquid, but I’m afraid I couldn’t care for it properly.”

Xyblik nodded and his air sac swelled and thrummed as his voice rang out sonorously, “I proclaim to you now, Abigail Dimmock, with all the oracular authority of my chthonic soul, that if an ineffable feathersquid is what you desire, then verily an ineffable feathersquid you shall acquire!” He added slightly less portentously, “I shall instruct you as to its requirements. Such as misting it regularly, exposing it to baths of fresh moonlight, and showering it with affection to cultivate its sweet temper. And they do enjoy treats of Cimmerian peanut butter.”

“Really?” Abby laughed and shrugged off some of her unhappiness. “Honestly, Xyblik, I don’t know why you think this is preferable, but… If you won’t sell me a love potion, I’m going to be alone the rest of my life, and if I’m going to be alone, better be alone with an ineffable feathersquid for company.”

Twelve minutes later she was walking out of Xyblik’s Cosmic Emporium carrying a hollow crystal sphere about the size of a basketball, peering at the glowing turquoise fluffball within, making kissy faces, and crooning, “Who’s a precious little cutie?”

Focusing her attention on her new little friend, she nearly ran into a man on the sidewalk outside. It was Charlie Godwin, and she blushed furiously remembering that she’d hoped to slip him a love potion.

Then she noticed that he, too, was holding a crystal sphere. And inside it was a glowing orange fluffball.

“Morning, Abby,” he said with a shy smile, “Looks like Xyblik’s doing a good business in ineffable feathersquid today. Just got this little guy.”

“But I bought one just now. How could we both…?”

He shrugged. “I don’t know. They say time’s a bit out of kilter in Xyblik’s. But yes, he talked me into one after I dropped by looking for… something else.” He suddenly blushed.

“Same with me.” She smiled.

Abby and Charlie watched their ineffable feathersquids for a few minutes. The little fluffballs had come near the edges of their spheres and were gazing closely at each other through the crystal. They chittered eagerly, while luminescent waves of color flickered over their whiskers, and their long, plumed tails fizzed like sparklers.

Abby looked up and her eyes met Charlie’s. She blurted, “Xyblik said they like Cimmerian peanut butter. Want to come over to my place and give them some treats?” 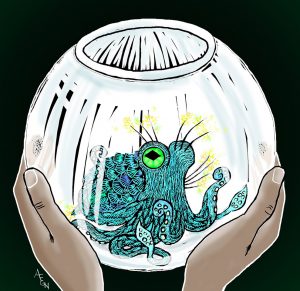 “Love Potion”  ©  Anne E.G. Nydam.  First published here in Cosmic Roots & Eldritch Shores, February 14, 202
Anne E.G. Nydam has been creating imaginary worlds since she could hold a crayon, bringing them to life in both art and writing.  A former middle school art teacher with an undergraduate degree in linguistics, she makes relief block prints celebrating the wonders of worlds both real and imaginary, and writes books about adventure, creativity, and looking for the best in others.  Her most recent book is On the Virtues of Beasts of the Realms of Imagination.  See her art and books at NydamPrints.com.