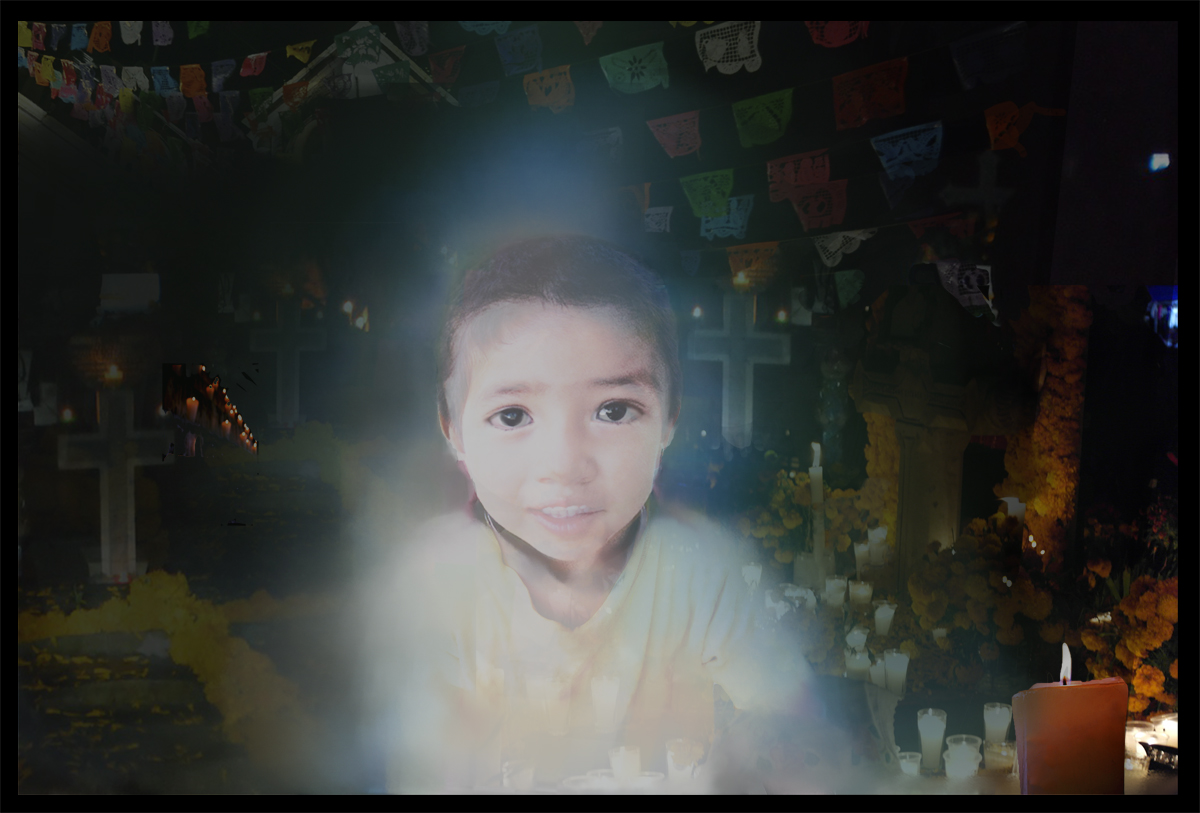 Estevan of the Children

The spirit children, the Angelitos, find their way home following the paths of marigolds, leaving their small footprints in the golden petals. That was why parents made impressions of their newborn’s feet even before they were baptized, pressing sole, heel, and each tiny toe tenderly to the ink, then rolling the little feet over white paper, learning by heart the curves and mazes of their children’s feet. Then if they were unlucky enough to have their little ones die, they would recognize the tracks their ghosts left when they came home on the eve of Dia de Muertos to spend one day with their families.

When the children’s spirits returned to their graves at twilight each November first, the paths between the cemetery and the homes of their grieving parents were filled with golden swirls of marigold petals imprinted with each tiny foot.

But Estevan lost his way back. Something he’d rarely done in his ten years on earth.  He’d been adept at finding lost children, animals, and objects. His mother Maria Leticia said it was because he’d been born on the feast day of Saint Jude, patron saint of those desperate, helpless, and alone.

He found a grieving widow’s wedding ring glistening down in the limestone arroyo. When Señor Diaz’s youngest daughter, Magdalena Maria waded into the river and got swept away, Estevan found her downstream clinging to a willow branch and helped her to shore.

So when he heard plaintive cries from an old dry well and found a small white dog looking up at him with eyes as brown and soulful as his own, he naturally slipped over the side to save him.  But a stone came loose and he fell.  They found his body at the bottom of the well, the dog curled protectively around his still form.  His mother kept the dog and called him Vite, little Estevan.

Now, almost a year later, Estevan awoke, slipped from his grave, and in the gray twilight wafted after the souls weaving their way around headstones and grave mounds heaped with flowers, candles, and incense.  Gliding past the old, black metal gates of the graveyard, Estevan headed for home, drawn by the yipping of Vite, the scent of sorrow, and the gentle tendrils of loss winding from his home.

Vite leaped joyfully as Estevan’s spirit passed through the heavy oak doors.  In the kitchen, his mother was placing aatole, his favorite sweet agave drink, and a dozen tiny loaves of pan de muertos beside the flowers and candles on his altar. The loaves were made with fresh eggs, blood oranges and wild anise seeds but salted with his mother’s tears and sweetened with her longing. Tiny sugar-bright, icing faces peeped from between the folds of dough like hidden sorrows.

Estevan stroked Vite and drifted to the altar, inhaling the essence of the bread into his hollow body, strengthening his spirit with his mother’s love. The bread’s inner substance filled him with happiness and made his drowsy.

He watched as his mother finished freshly making up his bed with newly laundered sheets scented with lavender and devotion.  He nestled into it and drifted off to a sleep so different from the slumber of death. He floated on memories, dreamt of sugar skulls and flying, of mother’s kisses and morning light, of playing fetch with a small white dog. Vite snuggled next to him, warming the memory of his bones.

The days were overcast and he was so deep in the dreams of home he didn’t awaken until after Dia de Muertos had ended.  Vite was nudging him and returning sunlight was flickering in his eyes. He leapt up, called out his farewells, and raced from the house, seeking the path of marigolds, but it was gone, blown away in the breeze, trampled by burros, cart-wheels, and feet.

Estevan whirled about like a leaf in a whirlwind, dazed by the light and noise and motion.  The papel picado, the paper pictures blowing in the wind, dizzied him.  The sun came pouring down through him and he began to fade. If only he could find home again and hide until next year, but phantoms navigate by the pull of darkness that rises in the dust of their bones like a tide, and Estevan could not find that beckoning call.  Too much time had gone by.  He was lost and the world was a haze.

He drifted through the days and nights fading to a wisp of cloud, dimming until he was paler than a mist. By winter’s solstice, he was less than a twilight haze over still water. He knew his time was done. By morning, he would be gone. Even his mother would forget the boy she loved so much, for though memory helps the dead live on, who can remember a ghost dwindled to nothing?  As he began to disappear, dwindling into darkness, a voice rose out of the night, quavering like light through a storm.

Estevan drifted toward the sound, pulled to something for the first time since he had awakened too late. He found the small spirit of a young boy.

“Why are you crying?” Estevan whispered, his voice a tickle in the wind.

The boy looked up, tears running transparent pathways down his face.

“I can’t open the door,” he sobbed.  “My mother won’t let me in.  She doesn’t want me!” He sobbed, each teardrop washing away more of him.

The boy’s eyes opened so wide Estevan could see into his soul.

“But it’s alright! You can rest. Sleep quiet in your grave. It’s peaceful in the cemetery. Then, next October thirty-first you can spend the whole day with your family.”

“Forever it will be.  Someday.  For now sleep quiet.”

Estevan laid a hand lighter than a gentle breeze on the ghost’s shoulder.  And as he did he could see about him, see a phantom echo of the bright pathway of golden marigolds. Their scent filled him with longing, and strength. He took the ghost boy by the hand, lucent fingers interlacing like braids of mist, and led him gently to the graveyard.  With a grateful sigh the boy slipped into his grave.

Estevan readied himself to lay down and sleep, but he heard a cry, soft as sunset, from outside the gates. He drifted out and there knelt a small translucent girl.

“Why are you crying?” Estevan asked. “Are you lost?”

The girl gazed up at him out of wide, night-black eyes and nodded.

“She can’t see you.  For now.” said Estevan. He explained why, gently took her hand, and led her to her grave.

“But I’m cold,” she whispered.

“If you lie down in your grave, the love of your mother will cover you like a blanket and each November first you can return home and let her memories fill you like a sea of hot chocolate and warm you for another year, until the time we’re all reunited.” He kissed her softly and she faded back into the earth.

Thus it was that Estevan did not return to the earth that year, or the next, or the next. He stayed behind to guide the lost and the newly dead down the path of marigolds to sleep. Years later, when Vite died, he joined Estevan in searching out and leading wandering spirits to peace and slumber.

And from that day to this, mothers tell their little ones that if ever they lose their way, in this life, or the next, there is a ghostly boy with a little white dog who will lead them to safety.

Estevan of the Children  ©  E.E. King, October 31, 2018 first publication.
E.E. King is a painter, performer, writer, and biologist.  She’ll do anything that won’t pay the bills, especially if it involves animals.
Ray Bradbury called her stories, “marvelously inventive, wildly funny and deeply thought-provoking. I cannot recommend them highly enough.”
Her books include Dirk Quigby’s Guide to the Afterlife, Electric Detective, Pandora’s Card Game, The Truth of Fiction and Blood Prism.
King has won numerous various awards and fellowships for art, writing, and environmental research, most recently the Whodunit 2018 award.She has been published in Clarkesworld, Glimmertrain and Flametree among many others.
Check out her paintings, writing, and musings at www.elizabetheveking.com

You can comment on this story at The Forums