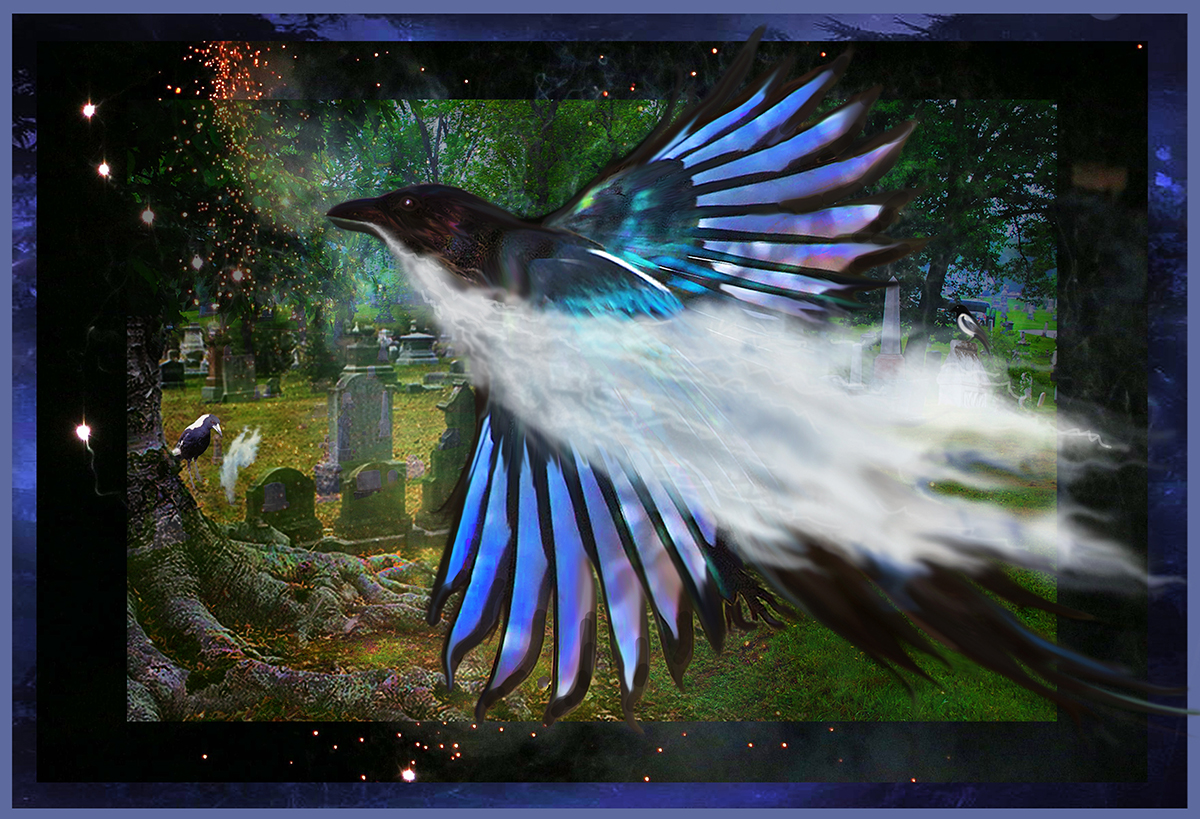 A Possession of Magpies

Catherine Linton has lived above the cemetery on Drakes Bay Lane for as long as she can remember. It is a beautiful old cemetery, edged by slender poplars that grow golden or sprout green as the seasons turn. The whitetail deer wandering between the graves clip the grass, prune the willows weeping over stone angels, and lick the salty tops of white marble tombs. It is full of bird song and the cooing of mourning doves, the only harsh notes struck by murders of crows and parliaments of magpies.

People picnic there — young lovers sharing bottles of red wine, old widows and widowers eating sandwiches at the graves of their departed. Catherine wonders if the dead appreciate these visits, if the smell of old grapes and fresh bread salted with tears and memories is food to their hungry souls.

She lived on the lane when it ended at the graveyard. Now widened and connected to the state highway, it has become a teeming throughway of the living passing the land of the dead. But Catherine’s hearing is dim, and her eyesight cloudy. She tunes out the roar of the cars. She sees Drakes Bay as it was, a small ribbon of pavement, edging past silent tombs and mausoleums.

It has been a cold winter. Now that spring is here, she passes the warming days on the porch, on a rocker as stiff and creaky as her bones. She watches the magpies swoop down and gather the souls rising from the graves of the newly dead, curling up from the earth like the smoke of extinguished candles. Her eyes are milky with cataracts but she can focus on the magpies because they are so black and white. And on the souls because she’s so close to joining them.

What do the birds do with the souls they so carefully collect? Carry them to another world? Soar above the clouds and set them free partway to paradise? Line their nests with these softer-than-featherdown souls? Feed them to their young? She shivers.

Thinking on how someday she will be buried in Drakes Bay, she expects a magpie will claim her. She wonders if a magpie took her betrothed, Tommy, when he died so long ago on a battlefield in France. She had been heartbroken, but now the memory is soft and gentle.

As she sits rocking in the sun one afternoon her eyes drift closed. Her breathing grows sonorous, and Catherine dreams of Tommy. It has been so long since she has dreamed of him it seems a visitation.

He stands before her, young and elegant in a black and white tuxedo. He passes beneath a chandelier and the black tails of his jacket catch the light and shimmer with a hundred iridescent rainbows. Tommy opens his mouth, but instead of his melting baritone, out comes a harsh caw and a thud.

She awakens with a start.

A young magpie has smashed into her window and lies near her feet. His right wing is bent. A breeze ruffles his feathers into a glittering kaleidoscope of colors.

Though she can barely take care of herself, she cradles the fallen bird in her withered hand and listens to its shallow breathing. She remembers how she used to nurse all manner of injured creatures — birds, squirrels, foxes, deer. Tommy called her Florence Nightingale of the Animals. She smiles at the memory, cracking her face into a million wrinkled folds.

She wraps the bird in a blanket, sets him near a heater, and searches for a place to house him. Beneath her bed she finds a shoebox. The dust rises from it like fog off distant mountains, like souls out of tombs. It’s filled with old photos. She empties them onto her bed. The top photo is one of Tommy.

She puts the bird in the towel-lined box and searches out some dry cat food, a relic from an old feline companion. She soaks it in water, placing it and a water bowl in the box.

When the bird wakes, he eats slowly, cocking his head and looking at her with one bright eye, much too knowingly for such a young bird.

Catherine straightens his wing and binds it to his chest with an old ace bandage. She wonders how she manages the delicate work with her knobby arthritic fingers, almost like claws themselves. The bird lies quiet in her hands.

She cares for the bird for weeks, binding and rebinding the wing as needed. It heals whole and strong, though slightly bent. She wonders if his flight will tilt to the left, if he will fly in circles.

The day the bird hops off the table and flies to the old upright piano she knows it’s time to let him go, though she flinches at the thought. It seems like forever since she has felt deeply. Now love and loss come crashing back down on her like a wave.

Catherine looks at the piano. Instead of the magpie’s dark feather’s glistening in the sunlight she sees Tommy in a shining black tailcoat. He is playing “Jeanie with the Light Brown Hair,” just like he used to, but instead of Jeanie he sings “Cathy.”

He was a real musician. He would play and sing, and she would join in, harmonizing with his smooth baritone. Her throat aches at the memory. Everything she has forgotten comes back – the way Tommy held her in his arms, how it felt like flying when they danced, the lightness in her soul when he told her he would never leave her.

“But you did,” she whispers. “You left and never came back.”

And now somehow, Tommy is both at the piano and beside her holding out open arms, offering to surround her.

Catherine feels young and weightless. She does not care that it’s impossible, she falls into his arms and they waltz round the room in sweeping circles. She wheels around, arms wide. Her heart races. Her head spins.

Her eyes darken, and her legs fold beneath her. She lies curled on the floor gasping for air. The magpie flies to her. His feathers brush her face, but Catherine feels Tommy’s black sleeve grazing her cheek. The bird pecks her wrist. Her chin. But now she lies still. He flies out the window, catches an updraft, and is gone.

Catherine isn’t found for a week.

There is a notice in the paper. Neighbors whisper it is a tragic reminder of what can happen when the old live alone. The house sits empty.

Catherine is buried in the cemetery below her house. No one sees her soul rising like smoke from her grave. No one sees as it is snatched by a magpie.

The magpie swallows her soul. For a moment there is darkness as long and silent as eternity.

So, this is what happens, she thinks. Black emptiness, never-ending nothingness.

And then she is seeing the world through the eyes of the bird, circling the boneyard, skimming the treetops, rising towards the clouds on currents of warm air. She is weightless. She is free. For the first time in so long everything is clear.

From out of the slender poplars a magpie flies up. His right wing is slightly bent, yet he sweeps through the air as smoothly as a melody, black feathers catching the sunlight and shimmering with hundreds of iridescent rainbows.

He joins Catherine and together they fly into the rising sun. 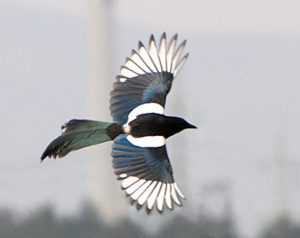 “A Possession of Magpies: ©  E. E. King.  First published here in Cosmic Roots and Eldritch Shores on December 23, 2019
E.E. King is a painter, performer, writer, and biologist – She’ll do anything that won’t pay the bills, especially if it involves animals. Ray Bradbury called her stories, “marvelously inventive, wildly funny and deeply thought-provoking. I cannot recommend them highly enough.”
Her books include Dirk Quigby’s Guide to the Afterlife, Electric Detective, and Blood Prism.
She’s worked with children in Bosnia, frogs in Puerto Rico, raised egrets in Bali, butterflies in Los Angeles, lectured on island evolution and marine biology on cruise ships in the South Pacific and the Caribbean, painted murals in Los Angeles and Spain.
Check out her paintings, writing, musings, and books at  www.elizabetheveking.com   https://twitter.com/ElizabethEvKing