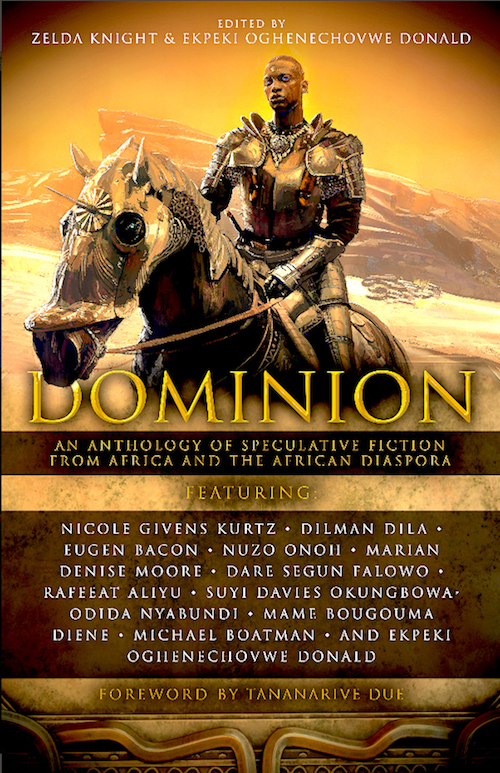 An Anthology of Speculative Fiction from Africa and the African Diaspora

Reviewed by Leena Naidoo, based on an advanced reader copy

This isn’t an anthology for the faint-hearted or those looking for neatly-packed stories with happy ever afters or even a ‘proper’ ending. I’d describe this collection as ‘gritty’ with lots of triggers, especially if you’re a woman or identify as female. There’s a sense of horror, even in some stories that aren’t of that genre. There’s a sense of expansion, of connection (or trying to connect) to the Universe and creation. There’s a sense of looking for balance in existence and often failing…but the stories are in the search, aren’t they? This anthology is for those who are searching for understanding of: actions and consequences, modern life and traditional ways, superstitions and alien interference. It’s for those who scorn package travel tours and seek their own adventures, knowing they may often be disappointed, but just as often rewarded with a gem, a glimpse of a mystery and a greater view of what’s out there.

It’s always hard to review an anthology as a whole, so I’ll discuss stories individually. Just so you know, I rate plot highly followed by characterization.

The opening story gives us ‘Trick Or Treat’ as conducted by a confused unidentified deity. This strange take on Halloween was quite violent, and the narrative somewhat disjointed, leaving the point of the plot uncertain.

An interesting story of a self-aware dog robot hijacking a ship. I found it cute and it did once again raise that old question about whether sentience and self-awareness equals ‘living’.

This time-traveling fantasy set during a crucial empirical battle in Africa had its fine moments. I enjoyed the historical and cultural details as well as the interaction between the father and son/mentor and apprentice. However, the story feel sketchy in terms of plot. I would have liked a stronger motive for the interference in the timeline and why that particular culture/war was selected for the lesson. The sudden change of heart by the Chief/Emperor at the end feels like an unexplained afterthought which is nullified by  the neat ending. I thought the story would be stronger if we were given some insight into why the change occurred

“The Unclean”, by Nuzo Onoh

Well written, evocative, historical, tragic, horror… This story drew me in, asked me to consider the character and dared me to judge them, condone them or damn their actions. It’s a rich story—rich in evoking the setting, the culture, the entwined and confusing aspects of religions and beliefs, superstitions and societal pressure and supplication placed on women and individuals who are different or who don’t fit the norm. I found myself asking why, after the almost seventy years since this story was set, are women on the African and other continents still subjected to such tragedies for family pride and standing? For me, this is one of the stand-out stories in this collection.

“A Mastery Of German”, by Marion Denise Moore

Although well written with an interesting premise, I was disappointed by the story devolving into a discussion of epigenetics while the mechanism of the plot suggested more focus on neuroscience and empathy, neither of which are fully explored.

Despite its abrupt ending, this imaginative science fiction was my favourite story by far, its imagery sticking in my mind leaving me thinking ‘Wow!’ This expansive story begins conventionally in a displaced village, then proceeds to combine spiritual practices and beings with the alien and the otherworldly. I was excited by this story and hope we see more of this author’s work, as well as a resolution for these villagers and those who try to rescue them.

To me, this poem feels incomplete and while hinting at a speculative plot, it doesn’t actually go anywhere in terms of a story. It’s a pity as I really wanted to know about the island and what the narrator would find.

“To Say Nothing Of Lost Figurines”, by Rafeeat Aliyu

This fun caper to retrieve a stolen artifact had me smiling. With rich world-building, strong characterization and a sense of the absurd, this was a truly enjoyable read. The abrupt ending was disappointing, leaving me wanting more, but accepting this could be the first episode of a series.

I’m not a fan of horror, but this vivid tale reminiscent of an episode of The Outer Limits drew me in and stuck with me. Set in contemporary Lagos, but probably identifiable with many other cities on the African continent, this story peeks at the world of body part traders and what happens when they break a cardinal rule. Characterization is strong along with the setting, and the solid plot is consistent and delivered well. Definitely one of the strongest stories in this collection, in my mind.

I found this an unpredictable story with great depth. It touches on so many aspects of our current lives though set in the near future: simple life vs the material, the cost of mining for resources, the corruption of corporations and governments, and the quest for survival and seeking your own truth. Compelling and thought provoking with great humanism, it’s my second favourite in this anthology.

I have to admit, I kept thinking of the movie Black Panther whilst reading this, so I can only describe it as a mixture of Lion King meets Black Panther.  Action packed with some interesting characters, gory and violent, it paves the way for a series but doesn’t really go anywhere. I think it may make a great start to a graphic novel, though.

“Thresher Of Men”, by Michael Boatmen

I found this horror story’s theme of revenge and the way in which it’s delivered to be less mature than the previous two horror stories of ‘Sleep, Papa, Sleep’ and ‘The Unclean’. That said, the setting and characterization are strong and the injustices it tries to address are ones that need to be spotlighted, but perhaps in a more mature manner.

An unusual dystopian story about a lost tribe and their leader’s perversion of survival that finally allows for a deity to readdress gender and other matters. I liked the world-building set within an exciting opening sequence. The main characters, I feel, could have been further fleshed out. The twist in the plot was well done, unexpected and makes a satisfying ending to this anthology.

Overall Dominion is definitely a worthwhile read. You can get your copy in eBook and print at AURELIA LEO, Goodreads, and on Amazon.